Parents ruin Connecticut Easter egg hunt: What led to a free event for children being marred by out of control parents?

A free easter egg hunt designed to be a ‘fun’ event for children has turned out to be anything but as chaos ensued at a PEZ Visitor Center in Orange, Connecticut after parents were observed ‘shoving and even stealing children’s candy from their baskets.’

‘When my son left, he had a broken basket and was hysterically crying.’

The chaos comes after the center’s general manager, Shawn Peterson, said event organizers had spread more than 9,000 eggs across three fields that were sectioned off per age group. Yet before kids had a chance to start hunting,  parents were racing on the field ‘to gobble up the candy-filled eggs.’

Wonders me: so whose the real kid then?

Offered Peterson: ‘So we started talking to people and say, ‘Hey, this is supposed to start at a certain time,’

‘Well, that lasted about a minute and everyone just rushed the field and took everything.’

Many other parents expressed their outrage on the center’s Facebook page, with some claiming that their children left empty-handed.

One parent, Joe Tomasco wrote that his 4-year-old grandson was trampled and that adults raided his basket.

‘It was like a friggin riot,’ the parent added.

Wrote another incensed parent, Lisa Stahl: ‘Shame on that parent that broke the little boy’s bucket causing him to lose the few eggs he had, that someone else then picked up. Shame on the person that bloodied another child’s nose and to those of you that hogged all the eggs for your own kids.’

Adding: ‘If anyone is to blame for what happened today it’s the parents who tore down the signs and those that encouraged the kids to go from field to field instead of staying in their designated area.’

And how did organizers try to contain the crazed parents?

In a bid to reckon with out of control parents, organizers brought out extra supplies and coupons, but even that wasn’t enough, as plenty of children still ended up empty handed. 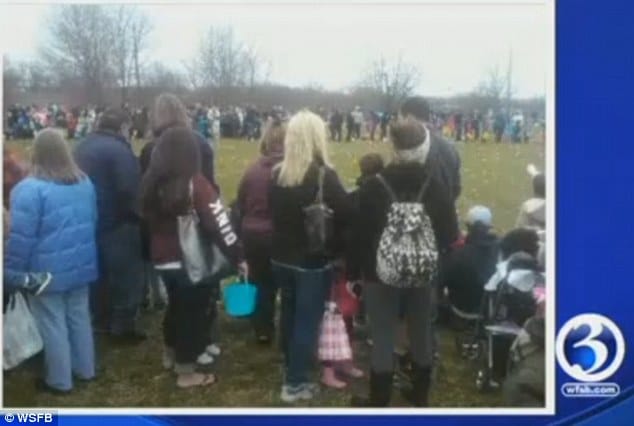 Saturday’s mayhem led to PEZ apologizing, telling that they had simply been overwhelmed by this year’s attendance.

Read an issued statement: ‘Based on the previous 2 years, we had an idea as to what we could expect based on previous activities. We boosted our numbers and planned for an even larger crowd this year. Unfortunately the number of families that came out to participate far exceeded anything we could have possibly planned for,’

Adding: ‘We sincerely tried our best to create a fun, free activity for everyone to enjoy,’

‘Due to the actions of a few, the good intent quickly turned into a mess. I would like to sincerely apologize to each of our guests, this was not something created to frustrate or make people angry. We only wanted to do good for the local community.’

Maybe next year organizers may want to think about charging an entry fee, that might keep a frothy attendance at bay ….or will it?