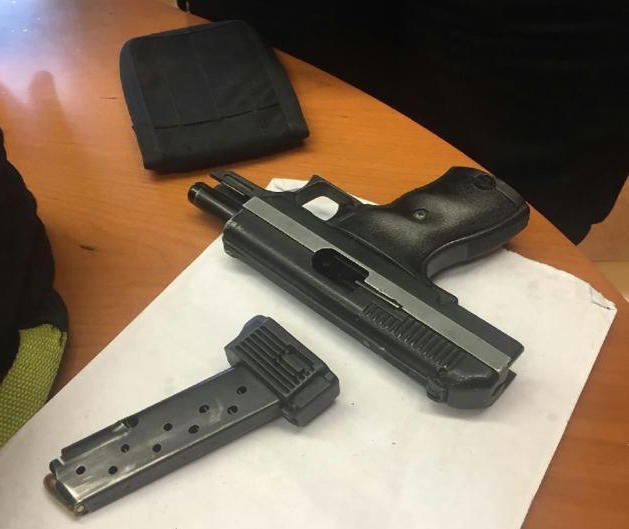 Authorities have told of an eleven year old Queens, NY fifth grade boy bringing a loaded gun to school after an altercation with a fellow school pupil.

According to a report via the nypost, the youngster concealed a black pistol, a Hi-Point .380 he had swiped from his clueless grandfather in his backpack Tuesday morning and breezed through the school’s entrance — which doesn’t scan for firearms — undetected.

According to the nydailynews, there was a single bullet in the magazine. Of question is if the boy knew the gun was loaded?

The incident led to grandfather Kenneth Miley, 54, who lives two blocks from the school being arrested on Tuesday on a variety of charges after the boy brought the gun to Public School 40 Samuel Huntington in Jamaica.

Told parent, Stacey John, 32, whose son is also a fifth grader at the school: ‘Oh my God! I can’t believe this,’

‘They (school) didn’t inform no one. How could this happen? … I’m so upset right now.’

Police were notified at 1:15 p.m. Tuesday after school safety officers — notified by other students — found the student’s backpack with the gun stuffed inside.

According to court records, the fifth grader ‘brazenly’ told of being adept at loading and unloading the gun.

Since the revelation of the boy bringing the gun to school, the child’s grandfather was arrested on charges of criminal possession of a weapon, endangering the welfare of a child and reckless endangerment.

At the time of his arrest, Kenneth Miely told cops he found the gun and planned to drop it off at a police station house. He faces up to 15 years in prison if convicted.

Two additional live rounds of ammunition were discovered beneath his bed.

Offered City Education Department spokeswoman Toya Holness: ‘This is incredibly disturbing and nothing is more important than the safety of all students and staff.’

Adding: ‘We will continue to work closely with the police department as they investigate this alarming incident, and ensure that all students and staff feel safe.’

Once inside the school, the student reportedly hid the backpack holding the gun behind some coats in a school closet.

Derek Jackson, head of the union representing school safety officers, said the incident should deliver a message to Mayor de Blasio about the continued need for metal detectors in city schools.

No charges were brought against the 11-year-old.