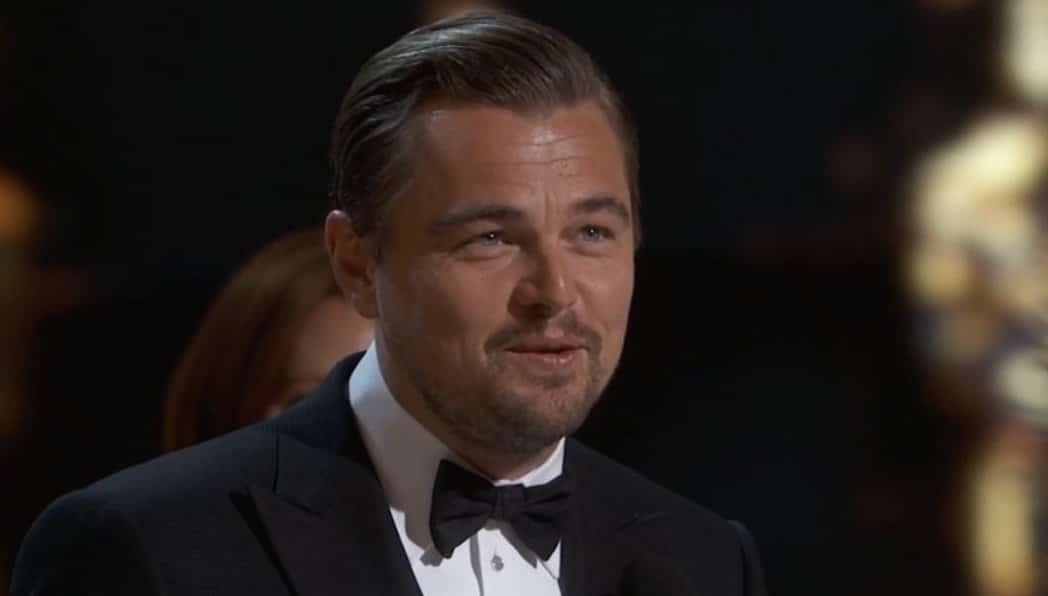 As Hollywood actor and mainstream media news mainstay, Leonardo DiCaprio took to stage to conveniently (at last) congratulate the Academy, his fellow actors, directors, producers, past and previous mentors along with his parents, after winning this years 2016 Oscar for best actor, the actor did caused some of us to wince: he called attention to the oligarchy and the mainstream that have in essence made his dizzy and profitable ascent so possible. In other words the real overlords the actor should be congratulating.

After having thanked director Alejandor G. Iñárritu (or should it now be the other way round?) for getting to play the leading role of a man on an existential quest in ‘The Revenant’ the actor took time to call attention to some lofty and noble concerns and ambitions.

Told the actor in hid acceptance speech: ‘Making ‘The Revenant’ was about man’s relationship to the natural world … climate change is real,’

Referencing man’s need to take attention to the damage his policies are imparting on the environment, ecology of the earth (never mind its citizens, especially those bereft of social or economic mobility, which might describe 92% of the US population) the actor went on to urge his listeners to take action in addressing such woes.

Actions that the actor as founder of the Leonardo DiCaprio Foundation, has sought along its ongoing ‘dedication to the long-term health and wellbeing of all earth’s inhabitants.’

Said the actor: ’It is happening right now. It is the most urgent threat facing our entire species and we need to work collectively together and stop procrastinating.’

‘Climate change is real, it is happening right now, it is the most urgent threat facing our entire species and we need to work together,’

‘We need to support leaders around the world, who do not speak for the big polluters and the big corporations, but who speak for all of humanity, the indigenous people of the world and for the billions and billions of underprivileged people who have been most affected by this, for our children’s children and for those people out there whose voices have been drowned out by the politics of greed,’

All things in the day to day scheme of neoliberalism and modern day capitalism which are swept under the carpet or just lobbied away. All things that most of us shrug our shoulders in dismay and resigned dispassion as most struggle with the day to day task of merely staying alive and tending to immediate needs, never mind the needs of our environment, ecology and our brothers in arms.

A plight that some wonder has come to be as a matter of design or simply the end result of society’s insistence of greater and greater consumption to the detriment to the planet from which many resources are extracted and impacted on.

Perhaps it was just a humble way of the actor reminding us that he is more than just a telegenic persona with a 24/7 main stream media press reminding us if this is the year he is going to win the Oscars, and whom he is dating this time,  to that of an artist who is using his fame, fortune to bring attention to issues and matters that so many dare to bring attention to with little resources at hand except the passion to address inequity, violence and exploitation of our current times.

Raising the obvious question: so what does one do when they become a powerful Hollywood player? Draw vague attention (or dare real and explicit?) attention to the conflict and inequities of the world (and let’s just stay on the safe topics- ecology) or just sit back and wait for the next bloated paycheck?

Or perhaps as one suspects, wait for another relishing role to impart one’s real feelings into and hope such on screen role inspires the masses to challenge the status quo and the gratuitous of our current times.

So much for being a highly paid actor apparatus in the main stream smokescreen machine, but a good performance nevertheless. Dare that you and I must next ….