In his reasoning the CEO told ceding to US Magistrate Judge Sheri Pym’s order stood to undermine encryption by ‘creating a backdoor’ that could potentially be used on other future devices.

Tuesday’s court ordered demand comes as investigators seek to discover leads in an encrypted iPhone, an iPhone 5c belonging to one of the shooters involved in December’s attack.

In its decision, Pym cited investigators inability to access a work phone used by Farook because they don’t know the shooter’s passcode along with Apple’s decision not to cooperate.

The encryption case relates to San Bernardino shooters, Syed Farook and his wife, Tashfeen Malik, who went on to kill 14 people in a December 2 shooting at a holiday luncheon for Farook’s co-workers. The couple later died in a gun battle with police, with the case leading to national debate on terrorism at the hands of Muslim activists.

The ruling comes as a victory for the Justice Department in a technology debate pitting digital privacy against national security interests.

Citing the order against Apple, Cook responded, ‘this moment calls for public discussion, and we want our customers and people around the country to understand what is at stake.’

Adding: ‘When the FBI has requested data that’s in our possession, we have provided it.’

‘But now the U.S. government has asked us for something we simply do not have… it would be wrong for the government to force us to build a backdoor into our products.’

In his reasoning, Cook held the court order ‘has implications far beyond the legal case at hand.’

Nevertheless some have wondered to what degree Cook’s stance is connected to user privacy versus fears of the viability of Apple’s sales in the future should security be breached?

The first of its kind ruling has set up a legal fight between the federal government and Silicon Valley.

The order, in which Apple is being directed to assist the FBI in breaking into an encrypted iPhone belonging to one of the San Bernardo shooters, represents a significant victory for the Justice Department.

The Obama administration has embraced stronger encryption as a way to keep consumers safe on the Internet, but struggled to find a compelling example to make its case. Until now.

In resisting the U.S. government order, Apple argues undermining encryption viz a viz the use of specialized software serves to essentially create a back door, comparing such leeway to a ‘master key, capable of opening hundreds of millions of locks.’

Noted Cook: ‘In the wrong hands, this software – which does not exist today – would have the potential to unlock any iPhone in someone’s physical possession,’

‘The FBI may use different words to describe this tool, but make no mistake: Building a version of iOS that bypasses security in this way would undeniably create a back door. And while the government may argue that its use would be limited to this case, there is no way to guarantee such control.’ 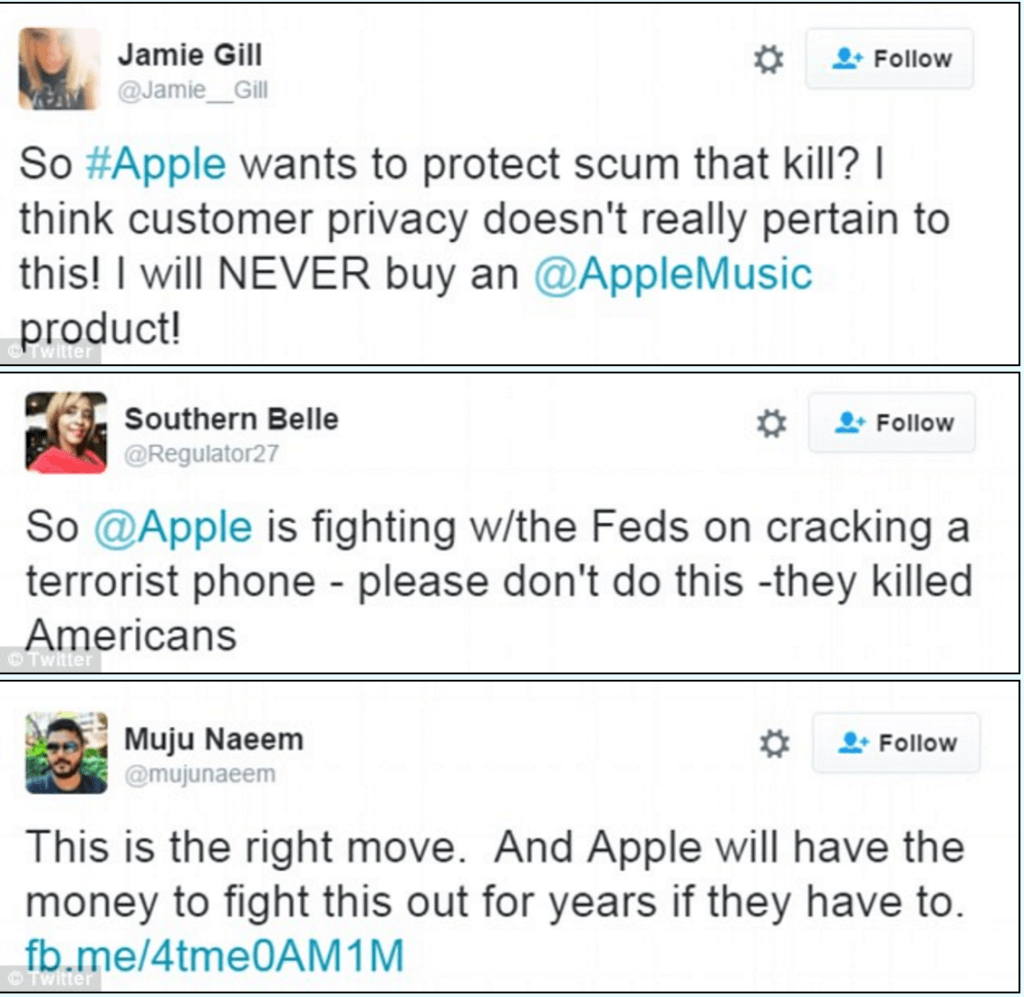 The @FBI is creating a world where citizens rely on #Apple to defend their rights, rather than the other way around. https://t.co/vdjB6CuB7k

To be clear, if the FBI's legal argument is correct, then a single judge could outlaw strong encryption.

Apple must win this fight.

The hold out comes after FBI Director James Comey told members of Congress last week that encryption is a major problem for law enforcement who ‘find a device that can’t be opened even when a judge says there’s probable cause to open it.’

‘I would like people to comply with court orders, and that’s the conversation we’re trying to have.’

Aware of the the potential pitfalls for Apple, the judge told Apple to provide an estimate of its cost to comply with her order, suggesting the government will seek to compensate the tech maker.

Apple has provided default encryption on its iPhones since 2014, allowing any device’s contents to be accessed only by the user who knows the phone’s passcode.

The ruling by Pym, a former federal prosecutor, requires Apple to supply highly specialized software the FBI can load onto the county-owned work iPhone to bypass a self-destruct feature, which erases the phone’s data after too many unsuccessful attempts to unlock it.

The FBI wants to be able to try different combinations in rapid sequence until it finds the right one.

The phone was running the newest version of Apple’s iPhone operating system, which requires a passcode which cannot be accessed by Apple, unlike earlier operating systems or older phone models.

San Bernardino County provided Farook with an iPhone configured to erase data after 10 consecutive unsuccessful unlocking attempts. The FBI said that feature appeared to be active on Farook’s iPhone as of the last time he performed a backup. 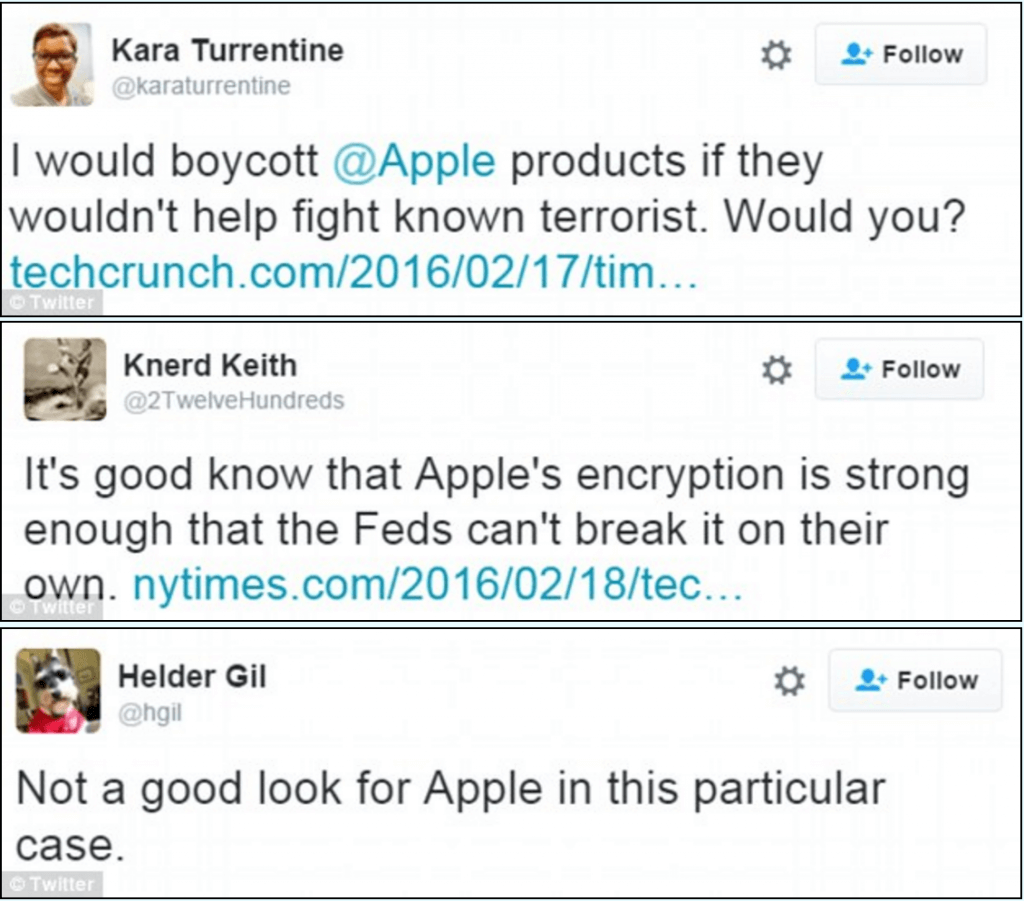 Commending the court order, New York City Police Commissioner William Bratton released the following statement Wednesday morning: ‘I commend U.S. Magistrate Judge Sheri Pym for the ruling in support of the FBI’s continuing investigation into the San Bernardino terrorist attack. No device, no car, and no apartment should be beyond the reach of a court ordered search warrant.’

‘As the threats from ISIL become more divergent and complex, we cannot give those seeking to harm us additional tools to keep their activity secret. I reiterate my call on Congress to act immediately in passing legislation to provide law enforcement the tools we need to keep America safe.‎’

Define safe? Define privacy? Define freedom? And are we really keeping America safe with practices that many argue set up yet another avenue for ‘big brother‘ to keep an eye out on the public?

In 2014, Apple updated its iPhone operating system to require that the phone be locked by a passcode that only the user knows. Previously, the company could use an extraction tool that would physically plug into the phone and allow it to respond to search warrant requests from the government.