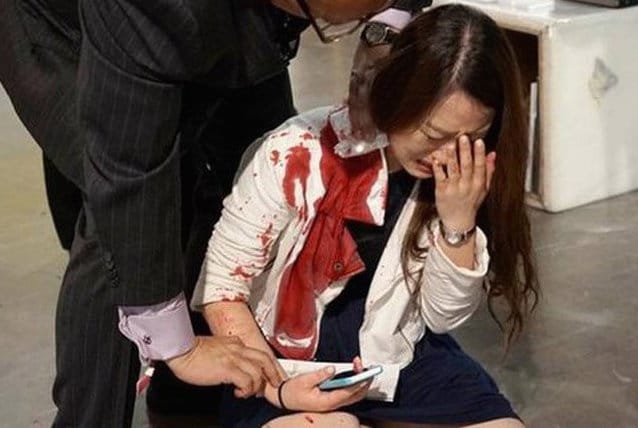 Going into surreal kitsch overdrive, an impromptu stabbing of one female at the hands of another female art lover led to observers on Friday night at Miami’s Beach Convention Center wondering whether they were paying observance to what they surreptitiously assumed was just performance art.

Which is to say most things that go down at Miami Art Basel these days has for better or worse morphed into a kind of performance.

The stabbing itself involved that of two females. The victim, 33-year-old Shin Seo Young and her assailant, 24-year-old college student Siyuan Zhao of New York, who didn’t take too well to the ‘evil spirits’ lurking inside her victim as the woman is said to have ‘bumped into me several times.’

Told the assailant as she was being escorted by authorities: ‘I had to kill her and two more!’

‘I had to watch her bleed!’

The stabbing (ok fine, let’s call it performance art…) led to the victim being stabbed in the neck and left shoulder with an X-Acto knife, lumped on a convention hall floor with blood streaming all over her before she was transported to Jackson Memorial Hospital’s Ryder Trauma Center (with non life threatening injuries).

Making the stabbing equally beguiling is the assertion that the victim didn’t even know her assailant and with her telling she had never dealt with her prior to the incident.

Ironically the stabbing occurred near an exhibit by artist Naomi Fisher, entitled “The Swamp of Sagittarius.”

Told the artist by way of the Miami Herald: ‘A guy walked up to me and said, ‘I thought I saw a performance, and I thought it was fake blood, but it was real blood.’

Of course one can’t help but wonder if next year’s Miami Art Basel event might come up with even more compelling ‘performance pieces,’ including a mouth watering terrorist shooting or something equally grotesque and surreal that bystanders can clink their champagne glasses at as they quickly rush to the next opening …