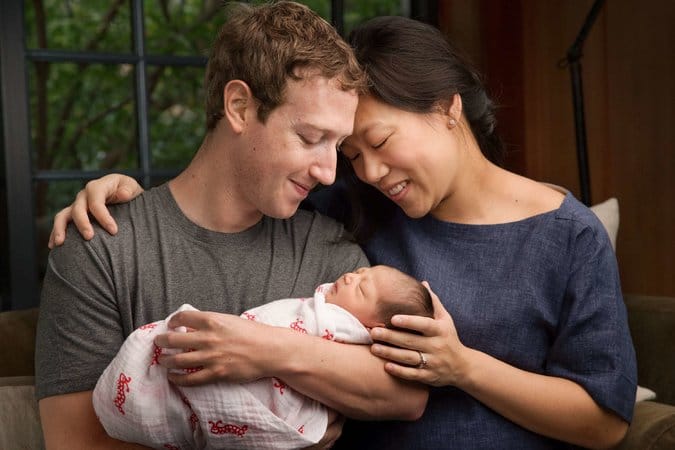 Making media headlines is the revelation that Mark Zuckerberg, 31 and his wife, Dr. Priscilla Chan have announced the birth of their daughter, Max Chang Zuckerberg along with the announcement that they plan to donate 99% of their current $45 billion Facebook wealth to charity. That of course still leaves the family at today’s market prices of Facebook, a mere $450 million in lump change.

In making his announcement, Facebook’s CEO told in a ‘letter’ to his and Priscilla’s daughter the couple would be selling or gifting up to $1 billion of his stock for each of the next three years. Nevertheless the social media entrepreneur did cede he did intend to maintain voting control for the ‘foreseeable future.’

Told the new father after a series of previous miscarriages on Facebook post: ‘Priscilla and I are so happy to welcome our daughter Max into this world,’

It’s in the post that the couple herald their goodwill desire to impart moral virtue upon the world, recognizing a moral responsibility (presumably because of their vast wealth and the moral obligation of those with vast resources to give back to society) to impart equal advantage to future generations.

States Zuckerberg: ‘We believe all lives have equal value, and that includes the many more people who will live in future generations than live today. Our society has an obligation to invest now to improve the lives of all those coming into this world, not just those already here.’

Writes the social media zion: ‘Our hopes for your generation focus on two ideas: advancing human potential and promoting equality.

Advancing human potential is about pushing the boundaries on how great a human life can be.’

Since the announcement of their daughter’s birth along with the gradual give away of Facebook stock, punters on the web have been more than happy to volunteer themselves as worthy recipients.

Bellowed one observer: ‘I just need $370K to pay off my mortgage,’

Max Zuckerberg finds out that Dad and Mom have given away $45 billion of her inheritance: https://t.co/9DkdLI2g86 pic.twitter.com/fGwxxhV6iL

Yet while Zuckerberg has by his commitment to place consideration of human capital and aid in the overall collective forward movement of our lot, he has done what many billionaires claim to do but few without the fanfare: to give back to society without demanding that their name necessarily be pinned against the money he is set to give away in the future. Unless of course, the Zuckerberg’s make a point of only giving their money away on the contingent that it is clearly understood that they are the benefactors and said cause reflects their generosity openly. Which in turn poses the question, how much of a gift to humanity is really taking place and to what degree is this just a bid to buy eternity and win a public relations coup d’etat?

For now, most of us will firmly welcome the Zuckerberg’s good will and recognize that with $450 in equity to play with, they have hardly put themselves out or forsaken too much of what one can actively achieve in one lifetime and presumably a collection of many future life lines including that of Max Zuckerberg.

Max Zuckerberg has to be one pissed-off baby right now. https://t.co/TeSvE3tSte