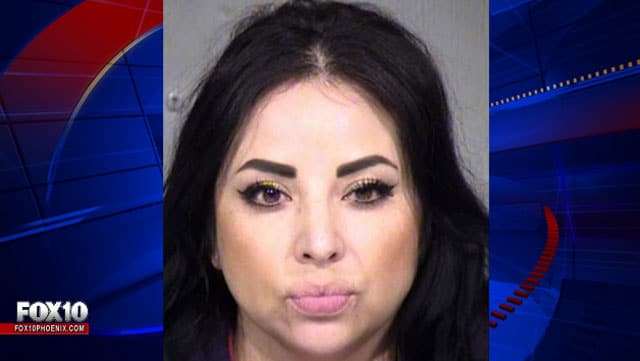 Arizona mother Jeanette Woods, 36 has been arrested after allegedly beating her 16 year old daughter’s teen lover to a pulp along with significantly damaging the teen’s vehicle with a baseball bat.

The alleged post midnight beating at the hands of the ‘irate’ mother came after the prying mom caught the teen making love with her teen daughter at the family home.

According to a report via KNXV-TV so treacherous was the boy’s beating, upon escaping the family home he abandoned his parked vehicle only to later find the extent of damage on his car amounted greater than $5300. Never mind the beating the teen lover received which left him black and blue and sick.

At the time of the beating, just after Thanksgiving the unidentified teen bolted with his pants on, leaving behind his phone and doomed car as he beat a hasty retreat.

It wouldn’t be until December 11, almost two weeks later that Woods was brought to account.

During his escape, the teen told how he vomited on the street during the ‘stressful‘ chase as Woods continued to hit him. A police report states Woods eventually stopped, only to then threaten ‘to get her cousins to take care of him.‘

After calling 911, responding cops found shattered glass in the woman’s driveway (‘hey future mother in law…’ ) and the teen’s battered car a short distance from the home. Along the way, several items inside the car were stolen.

In her defense, the mother told she thought the boy was an older man.

Of particular note, the incident marks the second arrest of violence against a minor for the ‘over protective’ mother. In 2012 the overzealous mother pled guilty to threatening her 17-year-old neighbor with a metal baton. Indeed…