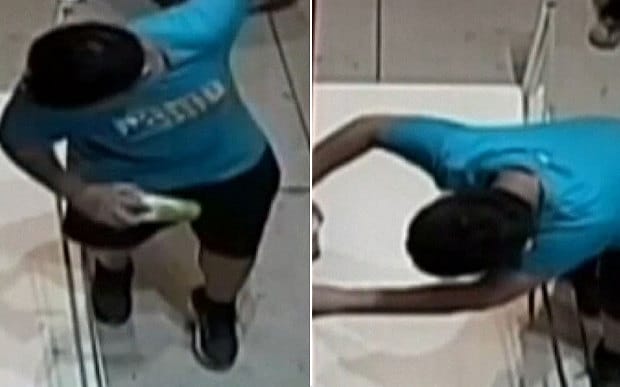 It will be a visit a 12 year old Taiwanese boy will undoubtedly won’t be forgetting anytime soon along with Taipei’s Huashan 1914 Creative Park gallery after the youth ‘accidentally’ tripped and punched a hole in a $1.5m Paolo Porpora painting (see video below). Yikes!

The tragic faux pas came on Sunday whilst the boy was visiting the famed gallery space when he suddenly tripped (while holding a can of soda in one hand) and sought to retain his violence, inadvertently leading to the boy punching a hole in the painting. Fortunately the boy was able to save the can of soda from spilling on the floor. Indeed.

According to Focus Taiwan, the boy was with a guided tour group visiting the exhibition “The Face of Leonardo, Images of a Genius,” which gathers 55 paintings by key artists starting from the Italian Renaissance and going up to the 20th century.

The incident caught on CCTV, shows the boy while holding a can of soda (why oh why…?) admiring the Baroque masterpiece with the rest of the group.

Then, as he follows the group towards the next artwork, the boy looks momentarily back to something or someone outside the camera, loses his balance as he bumps against the platform and rope which are meant to protect the artwork, and hits the paintings as he falls, smashing the beverage container against it.

The boy is immediately aware of what had just happened; he looks at the painting and at his cold drink in disbelief for a moment, and you can almost see the blood draining from his face. His supervisor rushes over and, after putting a hand on the kid’s shoulder, leaves to look for a museum official.

Since the faux pas, Andrea Rossi, curator of the exhibition, has said that they won’t ask the family of the boy to pay for the restoration and that the painting was (fortunately) insured.

Rossi has discussed the restoration process with a Taiwanese art restorer but is also considering shipping the 350-year-old masterpiece back to Italy so it can be restored there.

Meanwhile, the exhibition was temporarily closed on Monday morning, but it reopened in the afternoon.

‘All 55 paintings in the venue are authentic pieces and they are very rare and precious,’ TST Art of Discovery, co-organizer of the exhibition, posted on the exhibition’s official Facebook page. ‘Once these works are damaged, they are permanently damaged … We hope that everyone can protect these precious artworks with us.‘

At present it is not immediately clear what changes the gallery space will be making in the future to curtail similar incidents from happening again.