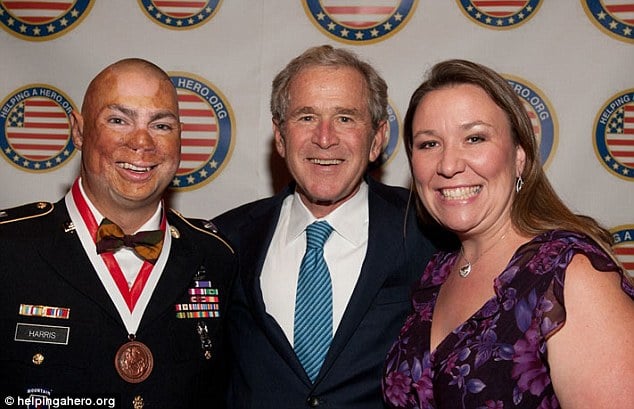 Revelations that former US president George W Bush took in more than $100 000 in order to ensure his participation at a 2012 helping a hero charity fundraiser for vets wounded in Iraq and Afghanistan has led to moral outrage.

The report comes via ABC News which discloses at the time the former president demanded the ‘speaking fee’ in order to guarantee his participation at the event. This despite the fact that his decision at the leader of the nation to send men and women to combat led to service personnel being left with lifetime wounds and debilitation.

Along with the speaking fee, Bush and his wife Laura were also afforded a private jet trip to Houston for the speaking gig at a cost of $20K to the non profit charity. Of note the report also discloses Laura Bush being paid $50 000 the previous year for her appearance.

Addressing the scandal, former marine Eddie Wright who served on the charity’s board and who lost both hands in combat during a tour in Iraq and Afghanistan in 2004 said that he believes the former president’s decision to demand the money was inappropriate.

Said Wright: ‘You sent me to war.’

‘I was doing what you told me to do, gladly for you and our country and I have no regrets. But it’s kind of a slap in the face.’

Reiterated the vet via Facebook Wednesday afternoon: ‘I like President Bush. He’s a man just like anyone else. The decision to take money from a non profit (any non profit) that raises money to assist Veterans who are wounded in a war that he was Commander in Chief of was a bad judgement call,’

‘I know a little bit about leadership. That’s not the type of leader I aspired to be in the Corps and still do. I would never take money from my Marines.’

Wright said he hopes the disclosure would bring to light larger issues about ‘non profit organizations that exploit and monetize disabled Veterans under the guise of caring.’

As for Bush, ‘What’s said is said. I am honored to have served with him as my Commander in Chief,’ Wright posted.

Asked to address the criticism of the speaking fee, a press envoy on behalf of the former president said in a statement, ‘President Bush has made helping veterans one of his highest priorities in his post presidency.’

Presidential speaking fees have been a hot topic thanks to the Clintons, who have had to disclose information about their income and are under pressure to reveal more as former Secretary of State Hillary Clinton’s campaign for the 2016 Democratic nomination heats up.