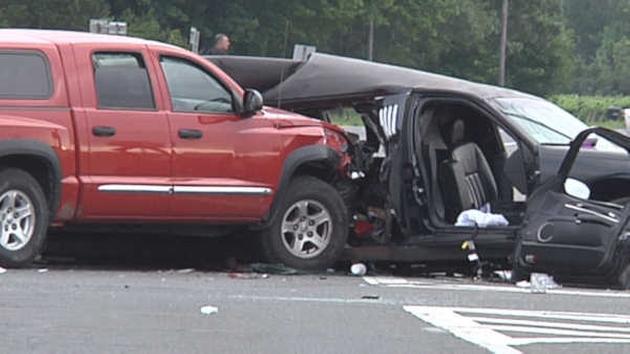 The lives of 4 bridesmaids have been cut short after a drunk driver in a red pick up truck plowed into a bridal limousine as it attempted a U turn along Route 49 in Cutchogue, Long Island, NY.

Killed were for four women, ages 23 and 24, all believed to be from NYC circa Saturday afternoon at 5.15pm. Injured was the bride and three other female passengers along with the driver, each hospitalized.

Upon smashing into the bridal limousine which had just completed a North Fork Wineries tour, the driver of the red Dodge pick up was observed running into nearby woods off the highway.

Cops gave chase to the North Fork resident, arresting him and charging him with driving while intoxicated.

It is understood the pick up driver incurred broken ribs and a bloodied nose.

Three of the four bridesmaids are thought to have died instantly whilst the fourth bridesmaid succumbed to her injuries after being rushed to hospital.

Two women, including the bride, are in critical condition.

The identities of all parties have yet to have been released.

According to the New York Daily News the women were part of a bridal or bachelorette party.

Told passing motorist, 76-year-old Ted Webb, 76, who called 911 after observing the calamity: ‘They had to die instantly. There was no noise. No screaming no shouting.’

Offered Southold Town Police Chief Martin Flatley by way of Newsday: ‘We don’t even have half of the people identified because they went to three different hospitals. We’re trying to sort out all the details.’

Adding: ‘He [the pickup driver] hit the brakes right before and he broadsided the limo right on the passenger side.’

Recounted Lynne Lulfs who witnessed the crash: ‘It was as if to say, ‘I know I’ve done wrong, come get me.’

‘As we came around, all we saw were bodies out the left side of the vehicle, hanging out.’

The stepfather of one of the injured women, whom he identified only as ‘Alicia’ from East Setauket in Suffolk County, said that she and seven of her friends had been out on a wine tour.

The women had hired a limo so they could drink and travel safely between several vineyards — only to be struck by an alleged drunken driver.

The carnage has since left State and local police and crews from seven fire department describing the carnage as the worst crash they’d ever seen.

‘It was a hectic scene,‘ offered Police Chief Flatley.

At present it is not understood why the driver of the red pick up truck was drunk driving at the time of the incident. His arraignment is expected to take place on Sunday.

To date authorities have declined to release the man’s identity.

The driver of the truck that struck a limo, killing 4, has been charged with DWI, police say http://t.co/DUwYF9C9r7 pic.twitter.com/PJAWyLg9U4

4 women were killed after a pickup plowed into a limo that had just left a vineyard, cops said http://t.co/DUwYF9C9r7 pic.twitter.com/jVicn9MzOv
— Newsday (@Newsday) July 19, 2015

4 women were killed after a pickup plowed into a limo that had just left a vineyard, cops said http://t.co/DUwYF9C9r7 pic.twitter.com/jVicn9MzOv