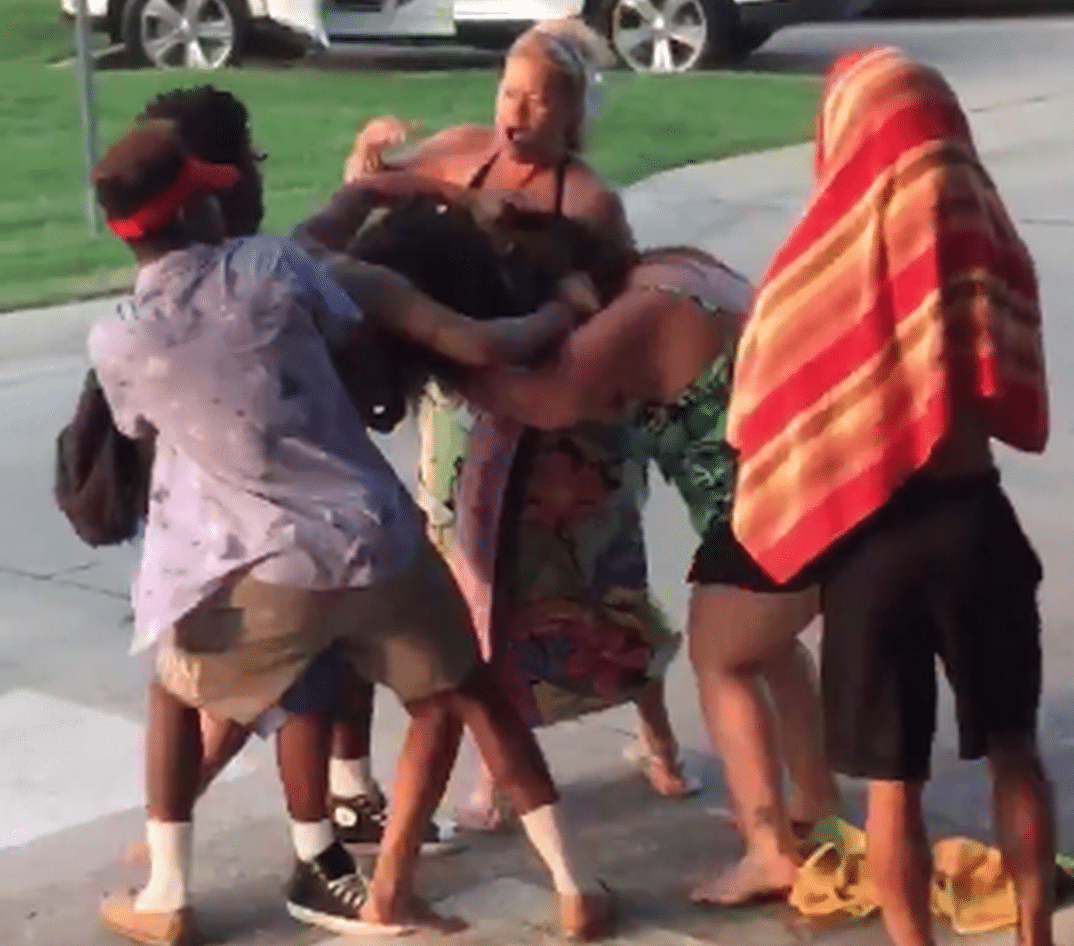 New damning video evidence has surfaced challenging the notion that Saturday’s McKinney Pool, Texas incident was a racial free for all in which cops, including Corporal Eric Casebolt and the community had purposefully targeted African American teens and other minorities.

At the time of the incident, residents at a McKinney subdivision were hosting an end of school party in their private community pool when organizers began noting an influx of attendees who hadn’t been invited or lived in the immediate community.

It has since been revealed many of the attendees had come after an advertisement for the party came to be posted on social media.

It would be when uninvited attendees were asked to leave that havoc would break out after an invited party attendee told black attendees: ‘Go back to ‘Section 8 housing.’

Reports breitbart: Now, at least one video (below) shows a fight that broke out between a teenage girl and two adults.

Police were called to the scene and attempted to get some of the trespassers to sit down while they investigated. Many of the teens fled and police chased some of them down. This is when the video of the incident with police began. There does not appear to be any video of the initial police contact with the teens.

That said other witnesses would take umbrage with the media coverage, challenging the notion that Saturday’s milieu was rationally motivated.

Posted Benet Embry, a black man on Facebook: ‘Look, I LIVE in this community and this ENTIRE incident is NOT racial at all,’

‘A few THUGS spoiled a COMMUNITY event by fighting, jumping over fences into a PRIVATE pool, harassing and damaging property. Not EVERYTHING is about RACE. WE have other issues that NEED our attention other flights of made up make believe causes.’

Adding: ‘I’ve never seen such irresponsible reporting and miss management of media resources in my life.’

Another McKinney resident, Bryan Gestner, posted on Facebook, since retweeted: ‘This was a Twitter party that turned into a mob event. Jumping pool fence. Assaulting 2 security guards, attacking a mother with three little girls. The video doesn’t show everything.’

He continued saying the kids were drinking and ‘smoking weed’ and they would not listen to any of the adults around the pool.

‘This isn’t about race,’ he continued. ‘This is about outside kids invading our neighborhood and had no respect for authority or the residents here. I have a target on my back now and I have been threatened by these punks that they are gonna shoot up my house when all I did was try to control the mob and actually tended to the girl and the boy that had a bloody lip.’

‘I commend the officer for handling this situation.’

Several people have since taken to writing on the McKinney Police Facebook page the youths antagonized police and that they should have obeyed when officers told them to stay put and keep quiet.

Responding to the incident, McKinney Mayor Brian Loughmiller said via fox4 he expected police to act professionally and with proper restraint.

‘Having seen the YouTube video, I am disturbed and concerned by the incident and actions depicted in the video.’

Calls to now have Corporal Eric Casebolt fired has since gained momentum on social media.