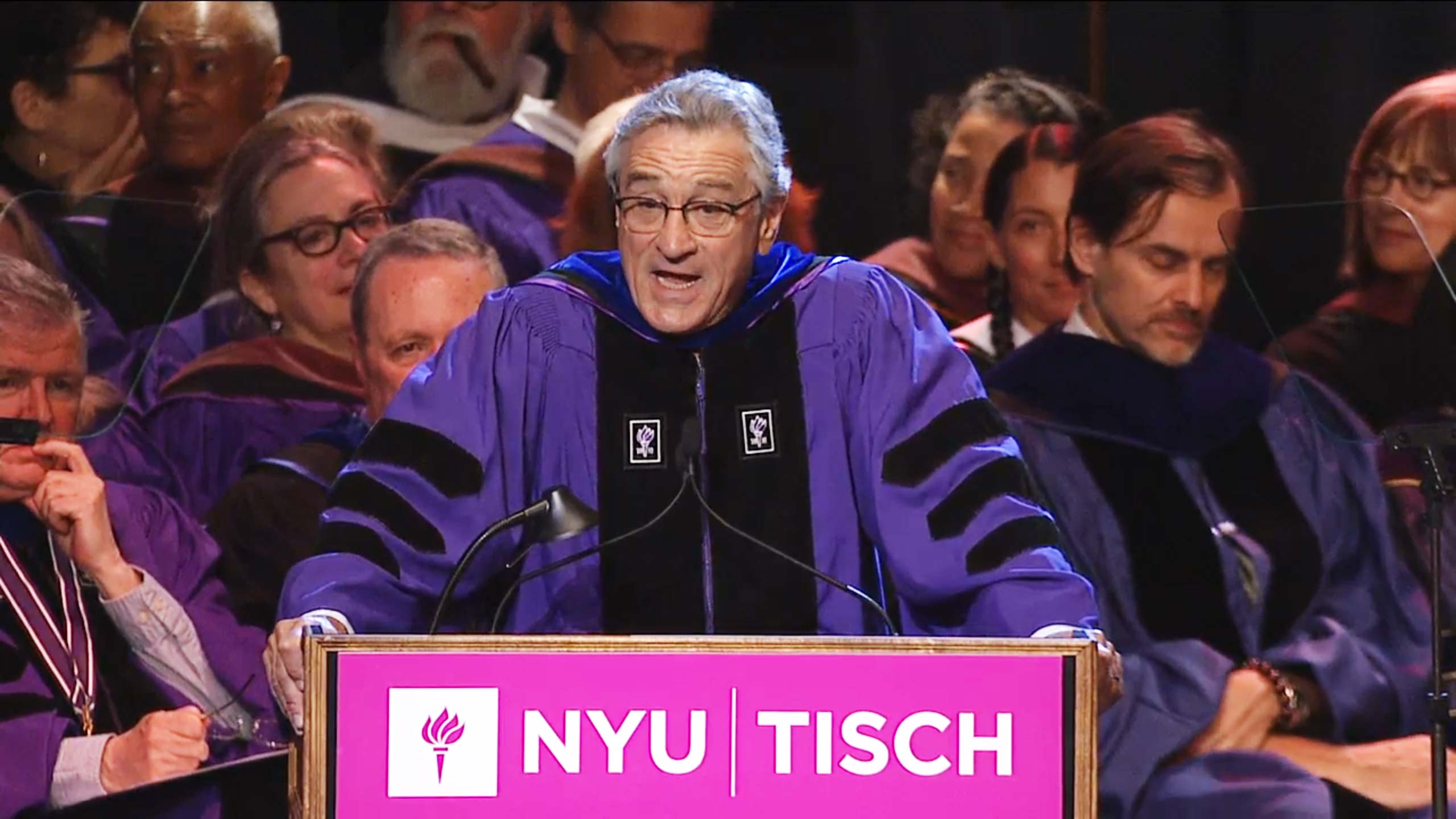 Invited to give a pep speech to the students, the actor stunned attendees, including aspiring actors, writers, directors and others that majored in the arts when he said that their future was far from a sure thing.

Told De Niro at this afternoon’s ceremony held at Madison Square Garden: ‘You discovered a talent, developed an ambition, and recognized your passion,’

‘When you feel that you can’t fight it, you just go for it. When it comes to the arts, passion should always trump common sense. Yeah you’re f–ked. The good news is, that’s not a bad place to start,’

‘Other NYU grads have brighter prospects,‘ he added.

‘The school of medicine graduates, each will get a job,’ he said.

Law school grads will too, he said, adding that if they don’t, ‘Who cares? They’re lawyers!’

But Tisch alums, he said, will be following a different path.

‘A new door is opening for you. A door to a lifetime of rejection,‘ he said. ‘It’s inevitable. It’s what graduates call the real world. … How do you cope with it? I hear that Valium and Vicodin work.’

Curious to see what the web thought of the actor’s comments I came across the following remarks that made me wonder, see what you think?

The school invited him to hopefully share some of his advice and knowledge . . . not to do a “Joe Pesci” routine.   I think we all appreciate and admire Mr. De Niro but being told we’re all “F’d” isn’t helpful at all to what everyone already knows is a hard world out there.  He meant well, but I doubt he’ll be invited back next year or any time soon.

I’m with you on that, loved ones united to celebrate a very special milestone moment, and he acts like it’s a comedy night club routine talking that way, that’s not nice, as veteran actor he should know better, and not be a jerk, nobody wants to hear bs.

Parents who spend tens of thousands of dollars on their child’s education don’t appreciate sitting through commencement speeches by people who curse and swear. I’m not a prude, and neither are my parents, but when I graduated we were subjected to hearing an actress brag about drug use and sex while at our college, and plenty of f-bombs. Why not try to be inspiring, not crass?

Robert DeNiro can do whatever he wants, it’s his speech. We live in a world where everyone gets offended by anything. If you were offended by his speech do you really think he cares?