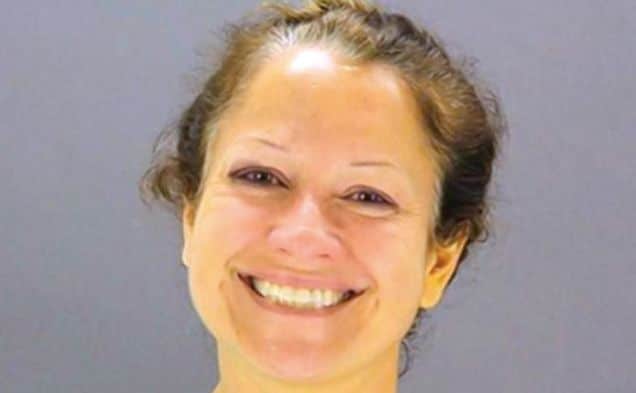 Nancy Duarte has something very cheery to smile about, if one is to go by happy go lucky mugshot pics that is. All smiles because she finally went and did what she told the world she would do: ‘Burn down that damn local yoga studio in Dallas.’

Nancy Duarte’s journey (she also goes by Suzanne Duarte too) to the slammer began shortly after admitting to cops that she had set fire to the American Power Yoga studio in Dallas, Texas after a witness purportedly caught her in the act.

According to Nancy, stuff got messy as a result of an ongoing dispute involving a number of men continually hitting on her who worked at the studio which naturally had Nancy seeing red and wishing all kinds of hate and vengeance.

Offered Nancy: ‘I thought it was going to make me happy … to burn the place that had brought me so much pain and suffering.’

Adding: ‘…just to set it on fire, just destroy it — get rid of the devil’s temple.’

While Nancy may look very happy, smiling from ear to ear and back again, don’t be fooled, cause according to Nancy she’s only just trying to let go of all that anger. Anger which of course led to her originally turning up to the studio after everyone had left with a baseball bat, a can of gasoline and some matches.

Although Nancy never meant to hurt anyone or burn anyone’s business, Nancy’s anger would get the better of her after reports that several places had to be evacuated and that things could have gotten much worse.

That said, angry or happy, you decide which, Nancy’s only regret is that the studio didn’t burn to the floor. Management would tell that the studio in fact only suffered minimal damage.

At present funny Nancy is being held on a $16 000 bond and if she ever gets out, she promises to not try and burn the damn studio again….