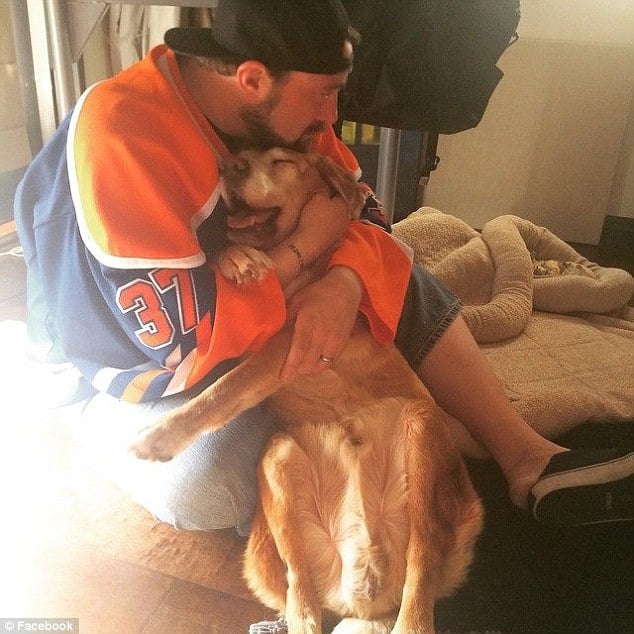 Clerks director Kevin Smith has landed in hot water after sharing what some have called poor taste and a ‘cheap effort’ to draw attention to himself when he shared an image of himself cradling the body of his dying dog on social media.

The fracas came Wednesday morning when the Mallrats, Chasing Amy and Dogma director and actor took to Facebook to tell fans his 17 year old pet, Mulder was dying.

Referring to a character from Game of Thrones, Smith wrote: ‘As I’ve spent the last year carrying him around like Hodor,’

‘I’m not taking this terribly well.

‘They never tell you when you get a dog, but there is a price to pay for being the recipient of 17 years of unconditional love, loyalty and companionship: they take a huge chunk of your heart with them when they go.’

Soon after his initial posting, Smith would then post an update announcing the passing of his 17 year old companion.

Wrote Kevin Smith: ‘He’s gone. RIP Mulder, my Buddy-Man. Thank you for 17 years of sheer joy and affection. It took a dog like you to make me a better person.’

The status update was accompanied by a photo of Smith, dressed in his signature blue-and-orange New Jersey Devils hockey, cradling the deceased dog in his arms and resting his chin on Mulder’s head.

Since Mulder’s passing, the post has been shared close to 16 000 times with more  than 50,000 Facebook users also leaving comments on Smith’s wall expressing their condolences on his loss, many of them sharing photos of the pets they had lost.

Wrote military veteran Jason Ray: ‘I’m very sorry sir. My military working dog passed away recently. I understand what you’re going through. I know I’m just some dude on Facebook but if there is anything I can do to help just say the word. His name is Doki. I’m not trying to take away from your post at all. Just offering my support.’

Another user Jamie Blanche said: ‘I know exactly what you’re going through. I had to put my Sam down last September. He was my best pal for 14 years and he died of cancer of the bladder.’

Not everyone, however, was on board with Kevin Smith’s decision to share his grief with the world.

In a later post on his account, the filmmaker told that someone posted his photo with Mulder on Reddit ‘without the relevant text,’ prompting some users to call him out for being an ‘attention-whore.’

The director, who is knon for keeping in touch with his fan base, responded to the accusation by saying that he took to social media to announce the death of his dog in part to unload the emotional burden.

‘This wasn’t about look at ME – this was about look at HIM. And based on the amount of likes and comments the posting drew, I don’t think the image came across to the intended audience as in poor taste.

The grieving dog owner went on to say that he can see how someone could misconstrue his post as a cry for attention, but he insisted that it was not his intent.

‘I was in pain and I just wanted to hear from people who knew that distinct pain of losing a dog. And I’m glad I did, because I got to read some amazing stories people posted about the lives and deaths of their pets.

‘It was therapeutic for me. We don’t really do wakes and funerals for our pets, so we usually miss that important step of the grieving process: grieving with others, sharing stories about the departed.’

And then there were these comments that also caught my attention. See what you think?

Ironically, we didn’t read much bad comments about the other OP being an attention whore when s/he posted a picture of the man crying while holding his dog that he lost to smoke inhalation, just about a week ago.

Competing for online attention often causes consumers of online content to become cynical. Links of hot women, sob stories, or content that can be considered circle-jerky are met with initial hostility from a wide demographic of internet users.

Kevin, you don’t need to explain yourself. This thread shows the love we have for our pets and the pain that comes with their passing. Wishing you some comfort in this sad time.

Lets entertain the idea that you did post that image for attention. Does anyone know? All they see is a man hugging his dog that looks to be having difficulties. Or, they see the caption and the picture. What haves you, what nots. The issue is — they don’t know your intent, you, your struggles or strife. I would say I don’t care if there was the potential for you to be seeking attention, because a far worst thing for me to do would be to be cruel to you if you were suffering. I’d rather wish you well, and better — than take the chance of calling you out and being wrong in such a volatile situation. You don’t kick people when they are down and suffering. It’s not worth that.