It had become public fodder that NBC news anchor Brian Williams was in trouble when a purported embellishing of his being on a Iraqi helicopter mission in the line of enemy fire came to be exposed.

What wasn’t known was how deeply the anchor who had come over the years to be the ‘trusted’ face of a troubled contentious network, NBC was in trouble. Would his transgression lead him to being spared, would his smug apology do the trick, or worse would studio heads be forced to just fire him? In fact they did worse, they suspended Brian Williams for six months without pay, ostensibly urging him to walk away without them having to give him the final deathblow, to plod the terrain of being perpetually humiliated and sufficiently muzzled, until a savory exit clause could be orchestrated in a months time in a quiet corridor.

But let’s be upfront, who does NBC and its corporate media elk (ABC, CBC, FOX, MSNBC, etc)  think they are fooling anyway? Who ever really believed the mainstream media was in it for the sake of journalistic integrity rather than the conduit it has morphed into; a rallying cry for corporate ethos and the oligarch status quo constituency (NBC after all was formerly owned by GE who makes bombs to kill people which NBC presumably was nonchalantly reporting without bias before imploring America to first invade Iraq).

Which of course engenders the deeper question what has become of media today, its role and what we ought to expect from it (apart from diversionary tales of how Miley Cyrus enjoys twerking her soul whilst the status quo and the ever expanding extreme disposition of the United States haves vs have nots goes unchecked and unreported or critically assuaged?  But most importantly what led to Brian Williams lying in the first place and how did that tie in with the culture at large of his employer, NBC?

The below is a rendering of the situation as provided by esteemed writer and legal counsel Christopher London, Esq who wonders out loud to what degree the culture of mainstream media has been tainted in the first place and how Mr Brian Williams merely became a victim of a culture he had been asked to help perpetuate until he foolishly one day came to believe himself unreachable and his own heroic news story….

NBC NEWS has Suspended Anchor ‪#‎BrianWilliams for 6 months, after weighing the gravity of his ‪#‎LIES & ‪#‎Embellishments relative to his contributions to the Network over 22 years.

OPINION: Brian Williams LIES and Shameless Embellishments Reflect Deep Rooted Insecurity In his own Journalistic Credentials & Quite Possibly A Sociopathic & Narcissistic Personality Disorder which #NBCNews Ultimately Could Not Contain

Even as the memes on Williams and his tall tales continue to litter the internet landscape, few have undertaken an earnest analysis of this situation to draw a true understanding of the lessons we should learn from this matter.

In my opinion, BRIAN WILLIAMS’ personal dishonesty is merely the tip of the iceberg with regard to the level of disinformation, deception, distraction and propaganda which are part and parcel of the America News & Infotainment Media.

Certainly, Mr. Williams’ lies were beyond foolish and stupid. No one would argue that point. But make no mistake, Williams’ lies only brought shame on and discredited his own reputation and his network’s longstanding news brand. Williams in effect jeopardized the security and standing of the network employing him and the many employees supporting his ability to continue to his job. In that regard Williams was beyond clueless, he was reckless in a way that affected the bottom line of many people. Williams literally put the “I” in TEAM. 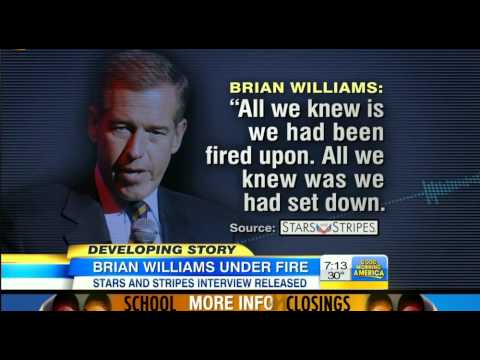 Nevertheless, they were not material lies of the kind that lead this nation into unnecessary war in the first place. You can go make fun of Williams endlessly if you wish, but if you are not holding other news media and politicians feet to the fire on issues of import to the American people, then you are merely a captive tool allowing a scandal to once again distract you from understanding what has happened to America and the ‪#‎TRUTH.

HERE is further heads up and just an FYI to some of the intellectual meatheads who see everything though the lens of “Liberal vs. Conservative” —- Brian Williams is personally truly more of a CONSERVATIVE politically speaking. I say this because the Progressive tilt of ‪#‎MSNBC has all the Neanderthals happily mouthing the “L” word to celebrate “Liberals” getting caught as the ones who LIE in the media; which is a complete and total falsehood.

It is thus first and foremost of critical importance to understand where the temptation to embellish emanated from. Ask yourself why would Williams commit to shamelessly and repeatedly embellish his credentials?  Consider the possibility that Williams went ROGUE (repeatedly telling tall tales) and  got caught trying to BRAND himself in a more HEROIC fashion, perhaps to make up for perceived shortcomings in his own journalistic biography.  If anything, Williams may have come to appreciate that his lofty station as the NBC Network News Anchor was based upon his appearance and strong masculine voice, not a strong background in journalism or serving with distinction in war time. Maybe without his obvious assets, few would have ever mistaken him as someone with the gravitas to anchor network news.

He did not graduate from college or have any uniquely qualifying experience as a journalist prior to his dramatic rise replacing #TomBrokaw. His lofty station as the Network News Anchor was perceived by many based upon his All American good looks, broad shoulders and his powerful masculine voice, not a strong background in #journalism or serving with distinction in War Time. According to ‪#‎CNN:

Brian Williams attended three schools and completed 18 undergraduate credits [and no college degree; no degree in journalism] before working his way to ‪#‎NBCNews anchor. Peter Jennings, #WalterCronkite and John Chancellor were also anchors without degrees. And many reporters and columnists never completed college, including Nina Totenberg of ‪#‎NPR, Carl Bernstein of The Washington Post and former New York Times columnist and wordsmith William Safire.

NBC was long owned by GE (which makes $$$ off of MILITARY CONTRACTS) when Williams was hired and promoted to Anchor the News at NBC following Tom Brokaw. Comcast, as the new owner, has the opportunity to move beyond Williams and the Infotainment News model to bring greater TRUTH to News.

‪#‎JonStewart is now available.‪ #‎ComedyCentral to NBC News Anchor is not that big a stretch, especially when you consider the possibility of the viewership that would be gained, especially among those who have long since stopped tuning in to News programming.

Williams, has always appeared somewhat ARROGANT and ENTITLED. Even watching him feigning HUMILITY was always especially painful. Yet, I would argue that underlying this ARROGANT #FACADE is a man who is undoubtedly DEEPLY #INSECURE about his station and perceived gravitas for the role he filled at NBC News. That he did not and simply could not stop from smugly basking in his pseudo-heroic fallacy illustrates a detachment from reality and objectivity that is beyond #NARCISSISTIC and truly SOCIOPATHIC.