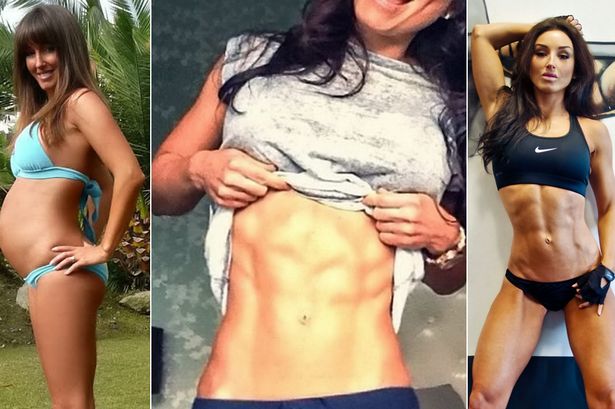 UK mom, Abby Pell has been accused of fat shaming her followers after posting a picture of her six pack on instagram.

The mother of one told she thought she was helping encourage others to lose post pregnancy weight when she shared the picture of her posing with her daughter.

She included the message ‘I have a kid, a six pack and no excuse.’

Unfortunately for Abby Pell, followers were less inclined to believe the fit mother and instead Pell came in for some heavy criticism.

Told one user: ’This is so demeaning – I bet she doesn’t have to work for a living.’

Another added: ‘This is fat shaming, pure and simple. Exploiting your motherhood to show off is despicable and shameless.’

In her journey to fitness, Pell tells the UK’s mirror how she managed to juggle motherhood along with running her own nutrition business while still being able to get to the gym an impressive 6 times a week.

Offers the fit mom: ‘I was on the heavier side so I tried a range of weight loss plans like The Atkins Diet and the South Beach Diet and just generally restricting my daily calorie allowance.

‘But I would always end up so hungry I’d get to the point where I couldn’t bear to starve myself any longer.

‘And as soon as I gave in the weight would go straight back on.’

Abby turned to intense weight training taking just a year to sculpt her impressive abs, after she ballooned to 13 stone (182 pounds) when she was pregnant with daughter Bella, now six, and struggled to shed the extra 50lb.

‘I decided to have just one last push, so I started lifting weights, and I was astonished at the results that came so quickly.

‘My bum was firmer, arms more defined and my abs were showing.

‘Now going to the gym is where I have my ‘me-time,’ which all mums know they need.’ 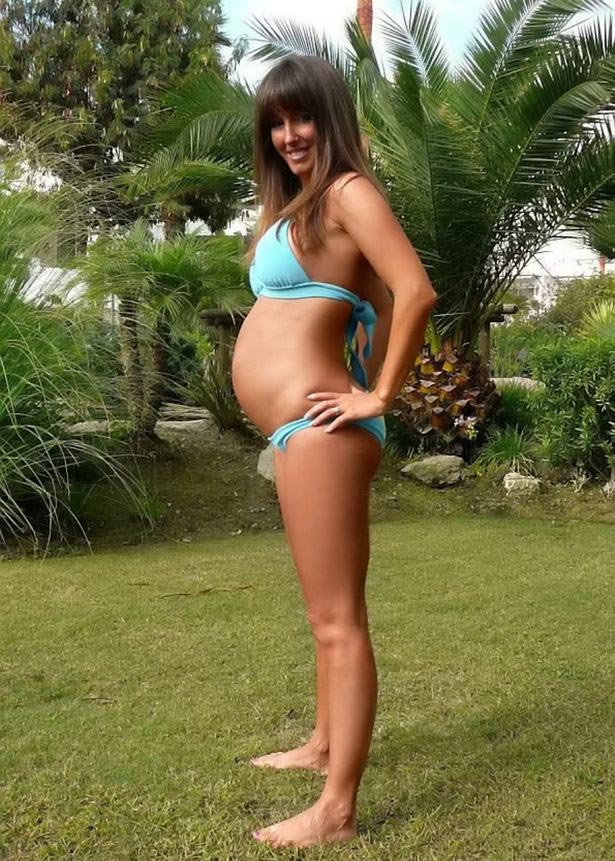 Abby, who now weighs 9st (126 pounds) and is a size eight, says she feels better now than before she was pregnant.

The personal trainer was immensely proud of her achievements and naturally wanted to share success with her friends and family.

According to the fitness mom, she only put up the picture of her flat stomach, complete with the offending caption, after her daughter told her that she looked like Wonder Woman.

‘One day Bella said to me, ‘You look like Wonder Woman, Mummy.’ That’s what gave me the idea for the Instagram picture.’

Since posting the offending image, Abby Pell has been astounded by the degree of scorn she has since received.

Reiterates Pell: ‘I never meant to offend anyone – my life is better now that I’m in shape, so I hoped I could encourage others to do the same.

‘It’s a sorry state of affairs when someone’s healthy passion is labelled abusive, whilst obesity, junk food marketing and laziness are all on the rise. You keep going.’ 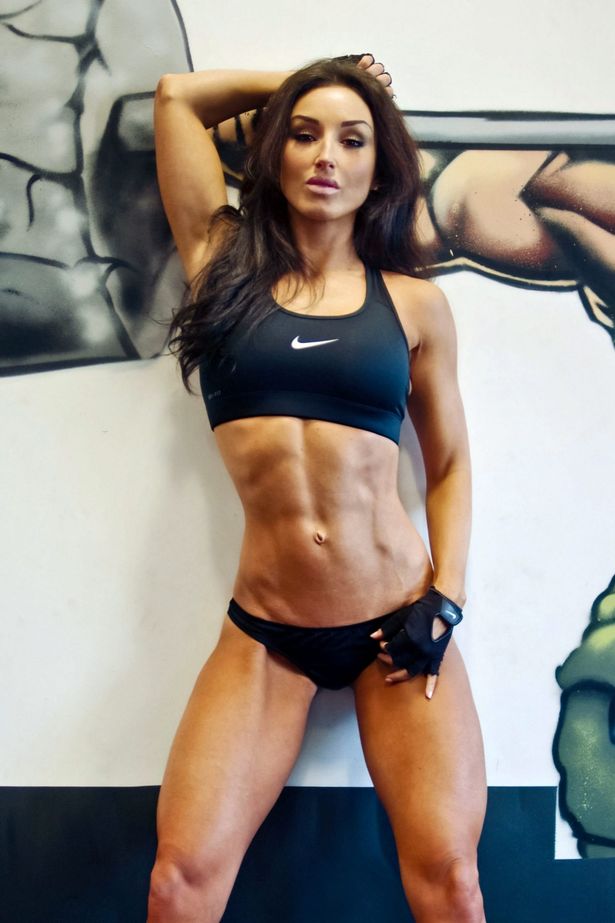 Abby, who posts pictures on Twitter and Instagram under the name @SuperAbs, reckons that if just one person takes up her advice, it will be worth it.

‘There were some positive messages congratulating me on working hard but they were mostly negative, criticising me for fat-shaming and adding pressure on mums to look fantastic.

‘I’m not saying the nasty comments are jealousy, but it might be that these people are insecure in the way that they look.’

The 33-year-old added that when it comes to shaping up too many people rely on dubious reasons not to.

‘Some people want to be able to make excuses and don’t like it when an alternative body type is put in their face.

‘Having a child is not a valid reason for being out of shape. Everybody can make excuses. I want to show that this figure is achievable.

‘It doesn’t matter if you’re overweight, if you have a busy lifestyle and kids to look after – if you want to do it then there’s always a way.

‘Being a mum doesn’t mean you have to give up.’

Abby adds that even people who are extremely fit don’t have the perfect body.

‘You can have stretch marks and a great figure – I’m so proud of my body and I want other people to be proud of their bodies too.’

you don’t have to have a six pack to be healthy. she has very low body fat and to get to the point where your abs are showing I don’t think is realistic or healthy. you can be a few pounds over weight and be healthy, you don’t have to look like her and it puts out the wrong message for mothers who might already feel insecure and ugly. They have this unrealistic goal to look like her. No excuse!! its not attainable unless you’re prepared to become a gym obsessive. Im not saying she doesn’t look good because that’s body shaming too. She looks great but im not surprised she’s had a load of negativity. what she’s pushing is unrealistic. What she could have said was eat clean,work out to the best of your ability. 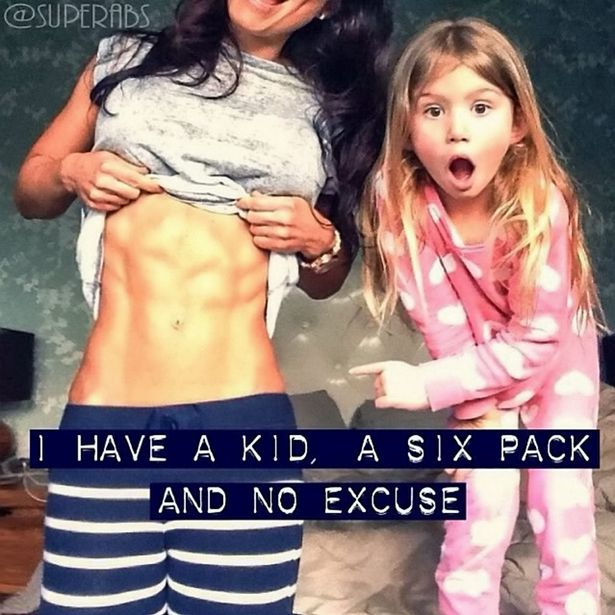 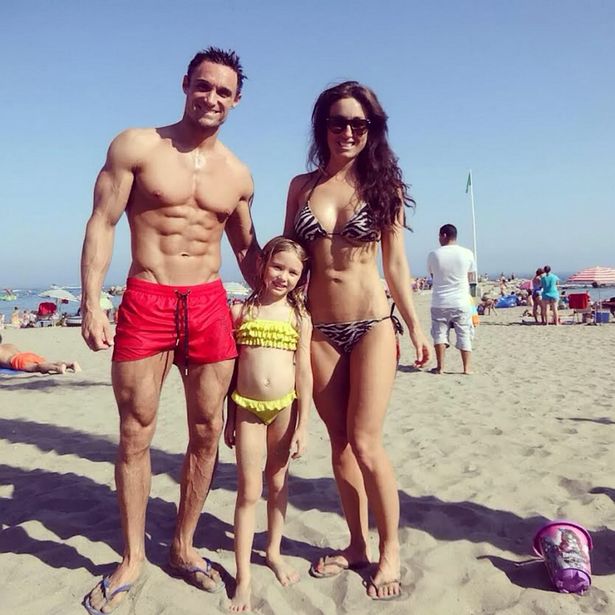