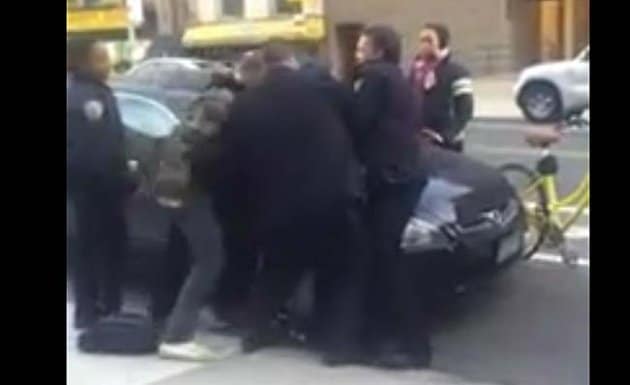 Video footage has caught the moment whom witnesses believed to be a twelve year black boy (later identified as sixteen) being beaten up and punched by a white NYPD undercover cop.

The beating would come as the boy was being apprehended by police officers on suspicion of assaulting somebody with a cane on the Lower East Side of Manhattan, Monday afternoon, 4pm when a plain clothed cop ran up to the boy and proceeded to repeatedly punch him in front of stunned witnesses.

Incredulously one witness can be heard on the video which would surface courtesy of another witness pleading with cops: ‘Hey! Hey! Hey!

The video as taken by actress Sarah Doneghy and later uploaded on facebook also captures other witnesses complaining, concerned for the boy’s safety.

Wrote Doneghy: ‘This happened today on my way to the post office,’

‘The kids were 12. They had supposedly pushed one of their classmates down. However when the victim was asked, he said those weren’t the guys.’

‘They were still taken away,’

The incident has since led to the NYPD internal affairs bureau launching an investigation.

The latest indiscretion courtesy of the NYPD comes after a grand jury elected not to indict Daniel Pantaleo in the chokehold death of Eric Garner this summer after resisting arrest. A decision that would leave many dumbfounded and crying foul.

Why miss the point? Because of his size and because he was RESISTING he needed extra measures to be subdued. Simple really.

his happen a couple of blocks from my house. These kids have been terrorizing the neighborhood. As a citizen and local resident, what the police did here was warranted. You should try to go to the park when these kids are inside of it. They throw rocks at you, they pick on the Chinese residence. These kids have done much worse and were warned to stop, but there is no video tape showing that. Wait until your an old person, and you have to deal with these kids. People need to know the truth. The police in the Lower East Side are the best in the City and I am personally grateful that the street down there are kept safe by them. THANK YOU NYPD!!! THE RESIDENTS OF THE LOWER EAST SIDE & SEWARD PARK GOT YOUR BACK!!!

It has ALWAYS been like this for Blacks in America. Whites are just now noticing!

Seems like a lot of cops these days are more interested smacking people down rather than defusing a situation. Not that many real cops anymore. No sense of judgement, no regard for people.

It is apparent the African American suffers a different legal system than does the white American. Everything is now coming to light with videos. Thank goodness that we can see and record the evidence. However, it’s sad that after 400 years of suffering and abuse, white rule in America can’t relent and learn to treat all people equally.