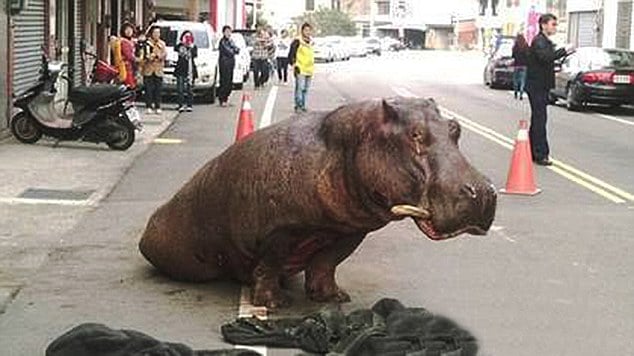 Making the viral rounds is the heartbreaking visage (see below) of a male hippopotamus left with broken teeth and tears streaming down its face after falling out of a moving van, not just once, but twice, before eventually dying as bungling Taiwanese zoo staff apathetically look on.

The initial fall saw Ahe a 32 year old hippo suffering a damaged leg and broken teeth after falling from a moving van en route to a zoo in Taiwan.

Yet things would go wildly wrong as the animal was being shepherded to its new abode as a harness zoo keepers had harnessed the hippo into gave way, dropping the 1.8 tonne animal on the ground a second time, where this time it would lay for hours before mortally succumbing to its wounds.

According to a report via the UK’s dailymail, medics told that the hippo died from injuries sustained as a result of being dropped the second time while being moved to a temporary shelter in a botched rescue attempt in Taichung city, a special municipality located in western Taiwan.

The initial accident happened last Friday when the panicked hippo jumped from the truck in which it was being transported, breaking a leg.

Television footage showed the hippo lying on the road — where it remained for several hours — with white fluid oozing from its eyes. 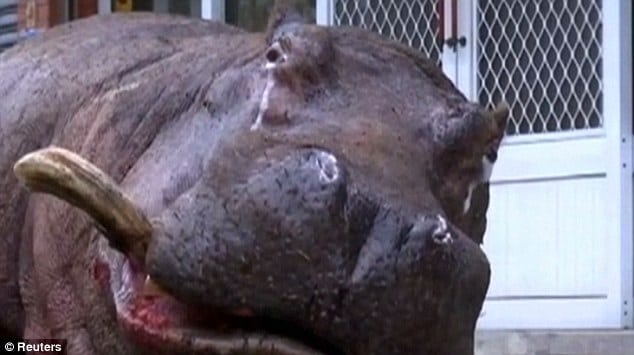 Things would become undone again, when the hippo was being taken back to the farm for treatment of its injuries, the cable on a hoist broke and its container crashed to the ground from a height of two meters (6.5 feet).

Reacting to criticism, a spokesman for the Agricultural Bureau in the Taiwanese city of Taichung said: ‘Sadly the 32-year-old animal died overnight as a result of his injuries.

‘An autopsy showed that the internal damage caused a massive supply of toxins to be released into his blood resulting in death.’

Local police who had calls from locals about the animal said several people have reported a dinosaur on the road causing some confusion and suspicion that it was a hoax.

Chu Ching-cheng, deputy head of the Department of Animal Industry in Taiwan’s Council of Agriculture, said the hippo’s owner could face fines for animal abuse and be charged anywhere between £2,025 ($3152 USD) and £10,127 ($15 763 USD) for losing the hippo in the first place and failing to secure him properly in the vehicle.

‘The city government has asked prosecutors to look into the case,’ Chen Ming-hui, a local official, told AFP, adding that the ranch has been ordered to make a plan to improve the management of the rest of the animals there.

‘The animal was not properly protected during the transportation process, leading to its injuries. What’s worse, it had not received due medical treatment the last two days,’ said Chu Tseng-hung, the head of the non-profit Environment and Animal Society of Taiwan.

The Wall Street Journal notes that although Taiwan’s laws require owners to obtain a permit for all animals used for entertainment purposes, the owners of the hippo never obtained a permit.

A spokesperson for a local animal welfare group, commented, ‘In Taiwan, we have laws and regulations aimed at protecting animals and livestock, but the execution implementation of these laws is often feeble.’

Ahe was a star attraction at its ranch and even appeared in a popular television soap opera several years ago, until he unwittingly came to star in a new soap opera which saw his untimely demise… 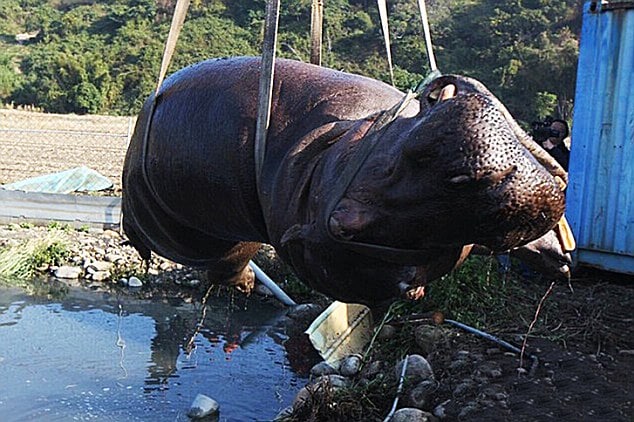