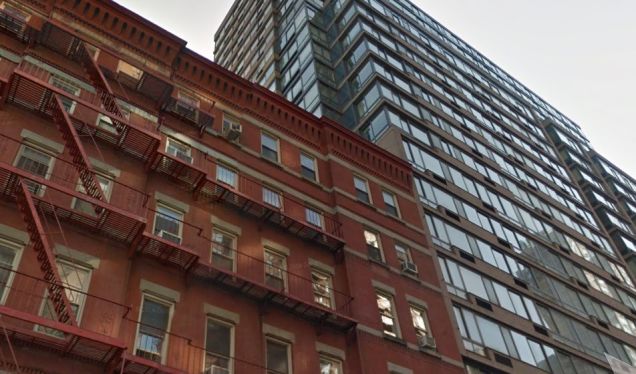 Sometimes it’s just best to keep one’s trap shut and be happy that one has what they have. Not so in the case of one upper east side tenant, Chad Ian Lieberman who may have now completely screwed up a deal which saw him only having to pay $100 a month for his 4 bedroom (no kidding kids) E. 86th St. Manhattan apartment. So how did Chad screw things up anyway?

Shit all came to the fore when Chad decided to file a suit challenging the 25 story building next door to be torn down on the grounds that it was blocking the light from three of the eight rooms of his rent-controlled apartment once inhabited by his grandfather.

But here’s the crunch.

Prior to Chad moving into the apartment, his grandfather, Eric Oppenheimer had been living in the four-bedroom apartment at 244 E. 86th St. with his wife when the Ventura was being built back in 1997.

Construction cost $99.2 million — and Oppenheimer cut a deal allowing his landlord, who owned the then-vacant lot next door, to build a part of the new building over an air shaft that had been providing light and air to three rooms in his apartment.

But what do I get in return?

In return, Chad’s grandfather’s landlord agreed to reduce the rent from $687 a month to $100 for as long as he and his wife lived there.

Can we repeat that shit together kids: ‘As long as Chad’s grandfather and his wife were still living there.’

Which was all good and fine until Chad’s grandfather died last year. This despite the fact that Chad Ian Lieberman came to move into the sprawling apartment in 2009 whilst his grandfather was alive.

After the death of his grandfather, Chad demanded that the apartment be restored to its earlier condition which led to Singh ruling that while the apartment was legal, Chad’s grandfather (as well as Chad) knew what they were getting in exchange for the only $100 a month apartment.

‘Oppenheimer agreed to less light and air in exchange for a benefit in the reduction of his rent. (Lieberman got the rent-controlled apartment after Oppenheimer’s death) with full knowledge that light and air had been decreased almost two decades ago,’ the judge wrote. ‘Accordingly, he has no standing to challenge the agreements.’

Chad’s landlord has since decided to hike the rent saying the $100 deal was only meant for Oppenheimer and his wife.

Although any rental increase is likely to sting, it more than likely wont revert beyond $687 previous rate plus adjustments but who knows …?