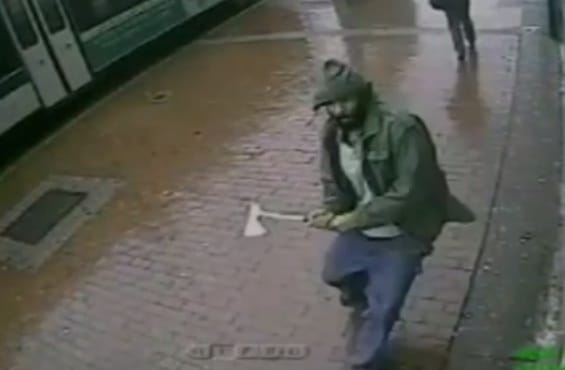 Zale Thompson a crazed former Navy man who came to be shot dead after a failed attack on NYPD cops has raised fears that he may be part of a terrorist organization seeking to impart terror in NYC.

The 32 year old man who came to be captured on surveillance video (see below) was shot dead at close range after slashing one Jamaica, Queens cop in the arm and another in the head without warning.

Also critically injured was a 29 year old female bystander a half block away who came to be shot by an errant police round.

Since yesterday’s attack, cops are investigating whether Thompson’s unprovoked, sudden attack was linked to Islamic terrorism. Concerns have arisen purportedly after Middle East group ISIS is said to have urged fighters to launch lone wolf attacks in the United States. 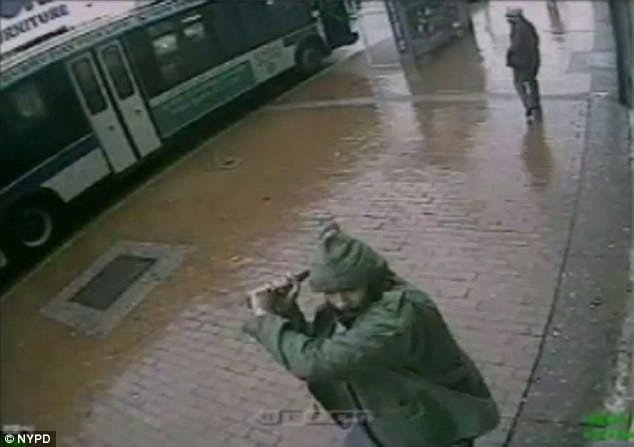 DNA Info reports that on Thursday afternoon a freelance photographer approached the group of rookie cops and asked to take their photograph.

As the officers were posing for the camera, Thompson charged towards them swinging an 18.5 inch hatchet without uttering a single word.

One 24-year-old officer was slashed in the arm

Another 25-year-old officer was slashed in the back of head and taken to Jamaica Hospital where he is being treated in critical condition, reports CBS.

The two remaining police shot at Thompson killing him at point blank range. 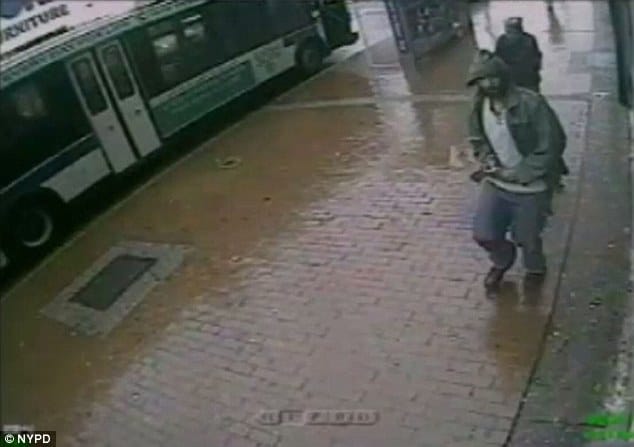 At the time of the incident, witnesses would tell that the man appeared to be hiding behind a bus shelter as if he was waiting to attack the officers, appearing almost as  if he was stalking them.

Since the incident, Police Commissioner Bill Bratton said he’s not ruling out terrorism especially in the wake of recent terror attacks in Canada.

Told Bratton: ‘There is nothing we know as of this time that would indicate that were the case. I think certainly the heightened concern is relative to that type of assault based on what just happened in Canada.’

The assailant’s facebook page says that Thompson graduated from Columbia Teacher’s College and that he resided in Queens. 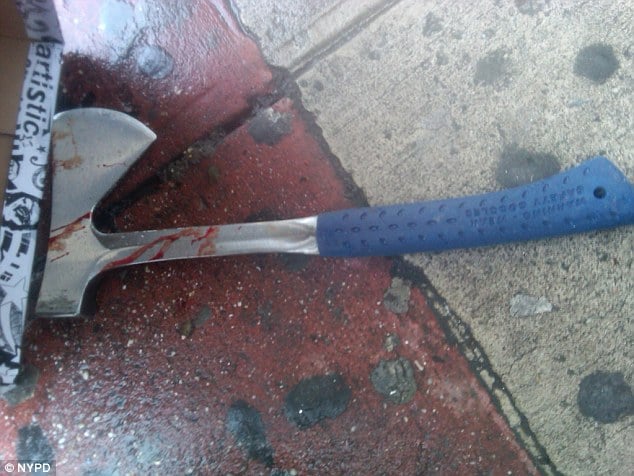 According to Vocativ law enforcement sources told Thompson appeared to have ties to a radical Islamic leader who supports “aggression” towards the United States government.

Told vocativ: Last month, Thompson, who says on his Facebook page that he graduated from the Teachers College, Columbia University in New York, commented on YouTube: “If you’re looking for ‘perfect’ Muslims who never make any mistakes in their Jihad, then you will be looking in vain! If the Zionists and the Crusaders had never invaded and colonized the Islamic lands after WW1, then there would be no need for Jihad! Which is better, to sit around and do nothing, or to Jihad fisabeelallah!”

Thompson’s comment was on a video explaining the idea of creating an Islamic caliphate, or borderless kingdom, which is ISIS’s ultimate aim.

“It’s ok for white people to draw pictures of a white jesus, and then colonize Africa, and enslave the negro in America, wipe out the native American, and invade the middle east. They call black people racist for rejecting the oppression they suffered from whites,” he wrote. “Listen, when black people have colonized the entire continent of Europe, enslaved its people, and sold them into bondage to foreign lands, then you can call them racist.”

Also disconcerting investigators are images said to be found on Thompson’s apparent Facebook page which have since raised questions about the deceased’s possible connection to radical Islam or any terrorist groups, see directly below.

Nevertheless commentators on the web have questioned the veracity of any purported connections to terrorism groups citing authorities bids to create disarm and to project failure on other outlets for the diabolical behavior of some of its citizens.

Contemplated users on the web:

Republicans want to focus on Paranoid Americans. ISIS and Ebola are being Hyped across FOX, CNN, and MSNBC. Fear Mongering is generating support for War, Surveillance, and Big Government.

Terrorism, Ebola, and racism by police officers against black people are the three most dangerous trends in America right now, and the general media is overplaying each of them. Newspaper sales and ad revenue generated by those three on television media are the rage. Newspaper and television executives have never been happier that they are right now.

Islam – the poison that is killing the world. Its now polluting the west. Its time the US, Europe and Canada got together and wiped out this vile religion.

Hands up, don’t shoot! Look, another example of police racism and brutality! Clearly that black man didn’t do nothin! 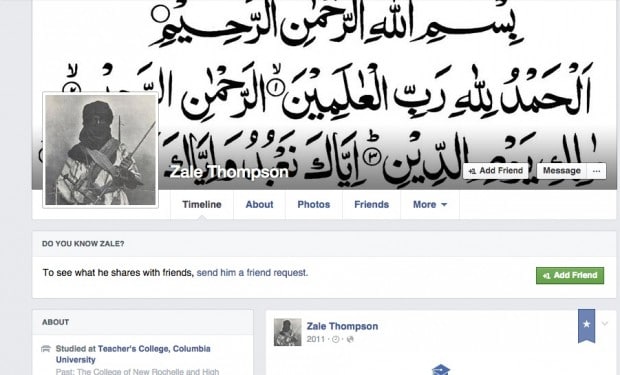