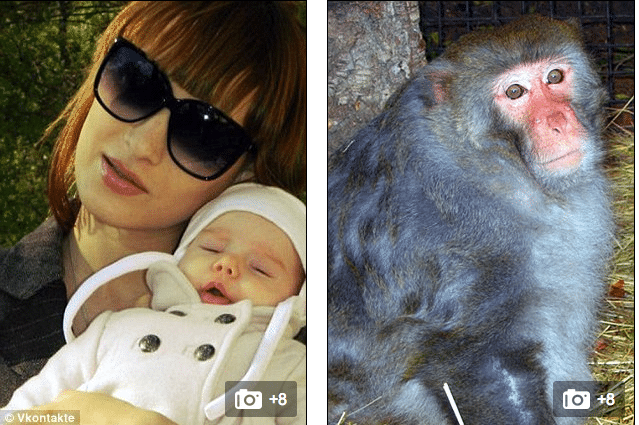 Vladimir (Vova) Verbitsky a six week month old baby has come to die after having his head ripped open after a local monkey came to escape.

Authorities would tell at the time of the incident, the boy lay in a pram in his home of Crimea when the blue macaque came to escape the yard of a wealthy zoo owner’s house in neighboring Kacha, a suburb in Sevastopol.

Police say the monkey gnawed through the rope and jumped a fence at the Verbitsky family home, leaping into Vova’s pram and biting his face.

‘The baby’s head was almost torn to pieces and the child was thrown out of his pram,‘ told a source.

The child’s parents would come to find Vova two metres from the pram.

Despite rushing the badly bleeding boy to hospital, the child would still come to die.

The owner of the private zoo rushed the badly bleeding baby in the arms of his mother Agnessa, 26, to hospital but he died on the way.

Svetlana Verbitskaya, the child’s grandmother, told Komsomolskaya Pravda newspaper: ‘Agnessa (the child’s mother) went into the house to the kitchen for a minute, to stir her soup, and it was then when the monkey jumped into the pram.’

‘The angry macaque rent the baby’s head and then threw him some two meters away. We failed to save the baby – it all happened within a few seconds.’

The mother, who has another child Evelina, 18 months, was only absent momentarily, she said.

‘Agnessa would never leave Vova unattended,’ the grandmother would add. ‘We had asked our neighbors so many times to take better care of their zoo.

‘One day his Cameroon goats came into the garden. One another occasion his Vietnam pigs ran in, and last year the vet service came here to take away a bear that was dying of hunger. I heard he was taken to the zoo in Yalta. They they got the new bear instead.

‘This is a rich family. they own a hotel and a shop, and they keep these animals just for fun. Do you think the owner asked us to forgive him? Not at all. He ran away to Sevastopol where he has a flat there.

‘And his house is locked now – the animals are alone crying in their cages.’

‘Our Vova was buried in the closed coffin. But at the last moment his mother Agnessa asked to open it so she could say good bye to her little son,’ said Svetlana.

The man is known to hold a Ukrainian passport and it is feared he has fled there to escape Russian police in Crimea.

He sent an aide to offer financial assistance to the Verbitskys – but they refused.

Pursuant to the incident the monkey would be condemned to be destroyed by lethal injection.

The local branch of Russia’s powerful Investigative Committee has started a criminal investigation against the man for ‘accidentally causing the death of an underage child’, for which the maximum penalty is two years in jail.

The baby was killed on July 9 and buried three days later, but almost two weeks later police have failed to track down the man since his financial offer was declined by the grieving family.