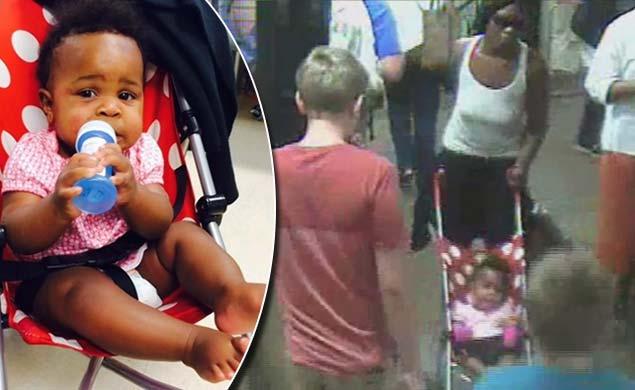 Cops this morning arrested Frankea Dabbs, the NYC subway baby mother who came to abandon a baby girl in a stroller yesterday morning on a Manhattan subway platform.

Asked why she had abandoned her child, the woman who had moved to New York from North Carolina just days ago told she could no longer cope.

Offered NYPD spokesman Stephen Davis: ‘She felt she couldn’t take care of the baby and thought she was leaving her in a safe public space.’

At the time of the incident, witnesses told how the 20 year old African American woman had been riding up uptown No.1 subway train shortly before noon Monday when she pushed the stroller onto the platform at Columbus Circle and rode away with the train.

Investigators said one woman, since identified as Catherine Boursier, an actress who noticed the unattended stroller stayed with the baby for approximately 20 minutes hoping its mother would return. When that didn’t happen, she notified cops.

The baby girl believed to be six or seven months old, was taken to Roosevelt Hospital, where she was listed in good condition. Officials said she was in the care of the city’s Administration for Children’s Services.

Relatives told that Frankea Dabbs, who was homeless after arriving in New York on July 2, had been plagued with troubles in North Carolina and had come to recently witness the killing of her baby’s father.

Relatives would add they believed the woman was battling mental health issues and that she had been recently kicked out of her stepfather’s home for insisting on always having the lights switched off.

Online records and mug shots would also show Dabbs had previously been arrested for possession of marijuana, assaulting an officer, breaking and entering and solicitation for prostitution.

The woman’s arrest came circa 12.30 am Tuesday morning near 72nd street and Broadway, after a passerby who had earlier seen televised surveillance video came to recognize the woman and alert a nearby police officer.

Pressed Frankea Dabbs would admit that she was the mother of the baby girl and was able to provide her name, age and medical history

She has since been charged with abandoning a child.