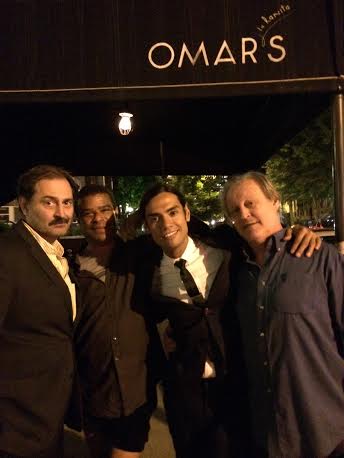 The sighting as it were came to happen outside of Venezuelan born, Omar Hernandez‘s West 9th st abode , La Ranita Restaurant where these days he holds regular court to the fashion and society elite of NYC, where he is often seen in bear hugs and angelic smiles with clientele who have come to take him as their own.

At the time, said author was taking a cigarette and discussing the merits of yet another scandal with Vanity Fair’s George Wayne who at present was dressed in chic white tennis shorts and dark sunglasses circa 11.30pm.

As Mr Wayne gesticulated as to the beauty of the evening, co host and the ever dapper Artan Gjoni also joined said author for a smoke, a frazzled Patrick McMullan whisked past, somewhat bemused by his latest assignment but jovially taken aback by the sighting of congregated rogues.

From there photos were taken and invitations to another batch of necessary society affairs were noted before sundry retreated into the boudoirs to gloss over another specialty cocktail drink, La Ranita, a hybrid of a margarita made with plum juice, apricot jam and other delicious ingredients.

Although a summer Friday night the flow was kicking as gazelle after the other flowed through the door merrily kissing Mr Omar Hernandez on the cheek before being whisked away to the member’s area presumably for one of the fine meals that Omar’s La Ranita offers.

Commented Vanity Fair’s George Wayne as he eventually took to make his evening exit, ‘Slav (our bartender) could you please spell out the ingredients to La Ranita,’ which is a task Mr Wayne pain stakingly takes to when he finds things and people that intrigue him. The recipe I phoned below courtesy of Mr Wayne, whom I presume plays a mean game of tennis when the urge takes him…

ps- George has some very big news to share in the forthcoming weeks, stay tuned…