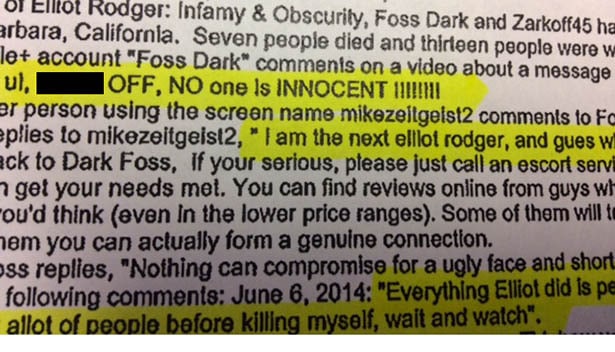 A University of Washington student, Keshav Bhide who unabashedly idolizes Santa Barbara killer, Elliot Rodger, has been arrested after going online to tell of his plans to kill women and praising the 22 year old year’s actions.

In a series of comments, Keshave Bhide told the following: ‘I am the next Elliot Rodger and guess what I’ll do the right thing this time,’

‘I’ll make sure I only kill women,’

According to authorities, Bhide, 23,  made these comments before and after the shooting at Seattle Pacific University earlier this month.

That shooting follows that of Elliot Rodger’s murder rampage which saw him kill seven people and wounded another 13 on May 23 in the community of Isla Vista, California.

Gawker reports that the comments were allegedly made on YouTube with police tracking the IP address to Keshav Bhide, who came to be arrested on Saturday.

In his online messages, Bhide ranted against women saying he would make sure he would kill only them. Another commenter told him to “please just call an escort service,” and gave details for how he could avoid losing his life or going to jail.

Bhide responded that he would “execute the same thing” as Elliot Rodger and that he had “no option,” according to court documents. Police said he used the screen name “Foss Dark.”

The student newspaper, The Daily, reported earlier this month that the school chapter of the Delta Gamma sorority contacted police after receiving a call from an unidentified man saying he was “looking for someone to shoot.”

Raw Story reports that Bhide is expected to be charged by police for cyber stalking and felony harassment. He is currently being held on $150,001 bail and was expected to graduate this year.

And then there was this comment by a reader that made me wonder:

The police charged him with cyberstalking and felony harassment which from the facts here don’t seem to support the charges. There might be facts that are reported else where, or are being withheld by the police.

I just hope we won’t be quick to advocate encroachment into the First Amendment when this person might be helped by treatment.