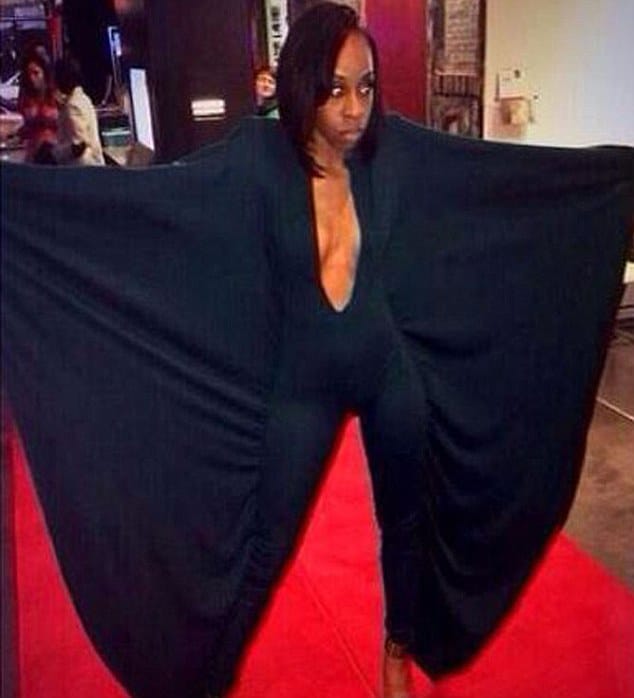 Rihanna has found herself under scorn after taking to twitter to mock 16 year Baltimore high school prom attendee Alexis Carter after the girl decided to wear an outfit that the pop idol once donned.

The outfit one of many students wore at a Hollywood inspired prom included that of a sweeping low cut bat like gown that the singer had once worn in 2010.

Taking to twitter, Rihanna posted a photo of herself wearing the low cut gown, captioned ‘IG’, alongside a photo of the 16 year old wearing the similar outfit with the caption ‘Real Life’ and a sad face. Which of course if Rihanna’s way of saying bixch imitation will get you nowhere.

In another picture, tweeted a few minutes later on May 8, to her 35million followers, Rihanna posted a photo of the teen next to the bat-like logo of the Wu-Tang Clan. If there had been any doubt that the singer was just horsing around it was by then gone as Rihanna suddenly found herself being accused of needless cyberbullying.

When the teen wore the outfit to her prom she told she received many accolades, with many complementing her on the way the low slung winged outfit hung on her body and that the outfit looked different.

Nevertheless social media users took a different tact, with many taking to twitter under the hashtag #PromBat where the young girl’s dress was mocked in a variety of altered photographs including by Rihanna herself.

Told Alexis Carter: ‘I was very offended. Why throw shade on it when you had on the exact same thing. The poses was different but the outfit wasn’t.’

Adding: ‘She don’t love her fans like she says she does.’

Since joining the fray on twitter, many have condemned Rihanna, arguing that as a pop idol she shouldn’t have participated in the brow beating of the teenager, leaving many to wonder about the 26 year old’s sense of judgement and the degree of contempt she holds for her fans. Others have gone so far as to call the singer ungrateful and mean spirited whilst others insist that the singer was just joining in the ‘fun.’

The latest accusations of cyber bullying follows a public spat the singer had with former on and off girlfriend of her former lover, Chris Brown, Karrueche Tran.

Needless to say fans were left disheartened by Rihanna’s feeling the need to perpetuate enmity.

Five days after the prom the cyberbullying showed no signs of relenting. Needless to say Alexis Carter has told she no longer plans on dressing like Rihanna in the future.