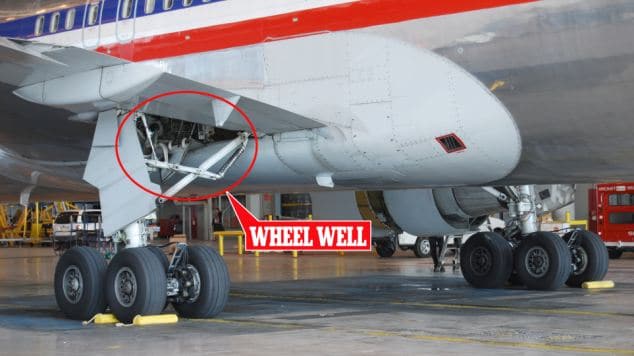 A 16 year old stowaway has survived flying halfway across the Pacific in the wheel well of a flight from California to Hawaii. This despite temperatures of -81F (-62C) at 38,000 feet.

The teen came to be found on the tarmac after Hawaiian Airlines flight 45 landed at Maui airport carrying no ID or belongings – apart from a comb.

He would later tell authorities that he had run away from home after an argument with his parents.

Simon would add the boy didn’t know where the Boeing 767 jet was headed.

Since the discovery medical experts said the teen’s body would have had to fall into a hibernation-like state – with his heart beating only a couple of times a minute – for him to have survived the more than 5 hour flight.

The teen was not charged with any crime and was handed over to child protective services.

Reiterated Croyle: ‘Our primary concern now is for the well-being of the boy, who is exceptionally lucky to have survived,’

Despite the boy’s miraculous recovery some have come to doubt that the boy ever made the flight in the first place.

Told one sceptic, aviation consultant John Nance: ‘This is a first in medical science and a first in physiology. I just don’t believe it.’

Dr. Richard Besser ABC News‘ chief health and medical editor, said to survive such conditions, the body has to fall into a hibernation-like state, with the heart only beating a couple of times a minute.

Another aviation expert, Peter Forman, said that he was staggered the boy survived.

‘The odds of a person surviving that long of a flight at that altitude are very remote, actually. I mean, you are talking about altitudes that are well above the altitude of Mt. Everest. And temperatures that can reach 40 degrees below zero,’ Forman said.

‘A lot of people would only have useful consciousness for a minute or two at that altitude.

‘For somebody to survive multiple hours with that lack of oxygen and that cold is just miraculous. I’ve never heard of anything like that before.’

Despite the incredulity that the boy could have possibly survived as a stowaway in the wheel well, security footage from Norman Mineta San Jose International Airport has since verified that the boy, who is from Santa Clara, California, hopped a fence to get to Hawaiian Airlines Flight 45 on Sunday morning.

The boy is now in the hands of Hawaii Child Protective Services officials.

Since the incident commentators on the web have questioned how the boy managed to evade airport security personnel to make the flight.