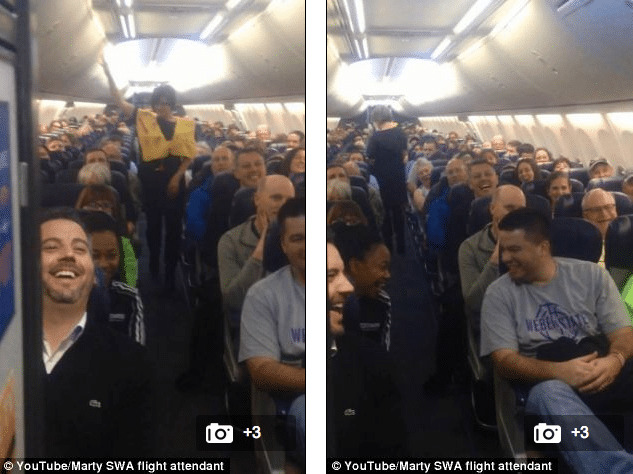 Kids there’s something to be said about flight attendants who dare to take themselves a little less seriously than the next flight attendant. Point in case, a Southwest Airlines flight attendant who over the weekend decided to try out her long awaited comedy safety procedure routine with willing passengers. See video below.

Tells the Southwest Flight attendant with virtuoso wit: ‘To activate the flow of oxygen, simply insert 75 cents for the first minute,’

‘Although that plastic bag may not inflate, you are receiving lots and lots of gin. Oxygen that is.’

‘That’s what we call very cheap entertainment,’ says the Southwest flight attendant. ‘Nobody had to pay extra but you certainly don’t get a refund!’

Which is to say flying a plane these days comes with its own numbing realities and indignities (don’t you long for the days where you could just get on a plane with your 3 carry ons free without an x ray wand scanning your being?).

In the end the routine was pure hilarity and in good jest but one supposes what probably makes the video a hit is the unspeakable and awkward reality that sometimes planes do crash, undergo turbulence, are hijacked, suddenly disappear and that is the god forsaken moment every passenger forever fears. Which might explain why a humorous take on something that can once every so seldom can become lethal or disturbing is a welcome relief to the unspeakable and unthinkable….

(Accidents occur at a rate of one per 1.2 million flights, and the odds of dying in a plane crash are 1 in 11 million)

As of publishing Monday evening the youtube video has been seen 330K times. Who knows maybe a guest appearance with Jimmy Fallon might soon be on the guards….