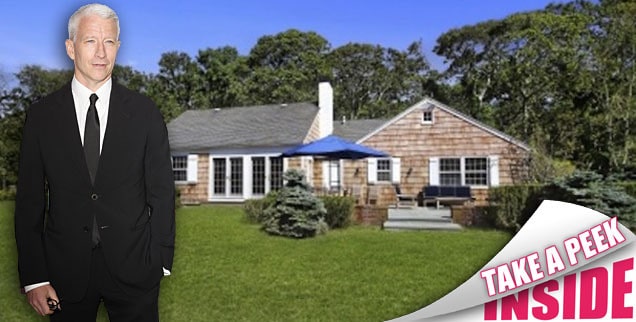 In an interesting interview on the Howard Stern show this morning, the CNN anchor, Anderson Cooper revealed that his mother, Gloria Vanderbilt will not be leaving him a dime when she passes away.

The heiress turned jeans designer and perfume developer, who at present is aged 90 is the great-great-great-granddaughter of the railroad tycoon Cornelius Vanderbilt. Her wealth is estimated at $200 million.

Told Cooper: ‘My mom’s made clear to me that there’s no trust fund. There’s none of that,’

‘Who’s inherited a lot of money that has gone on to do things in their own life? From the time I was growing up, if I felt that there was some pot of gold waiting for me, I don’t know that I would’ve been so motivated.’

Interestingly the 46-year-old journalist makes a reported $11 million per year as a result of his CNN contract.

Furthermore the anchor who is hardly crying for a lack of wealth lives in a multi-million dollar converted firehouse in New York City’s Greenwich Village and also has two neighboring Hamptons homes.

Which is to say Anderson Cooper probably doesn’t need the money in the first place. Then again one can say the same of many multimillionaires who go on to inherit vast family fortunes anyway.

Reiterated the journalist: ‘I’m doing fine on my own, I don’t need any,’

During the radio interview with Stern, Cooper maintained that he was totally accepting of the deal with his mother, telling an incredulous Howard Stern that he has no idea what she will do with her money.

Anderson went on to tell that he does not know how much is in his own personal savings account (which is a polite way of deflecting attention) before attempting to appear humble and steer the interview towards the notion that he is not really all that privileged and fortunate in the first place.

Which of course is how the journalist was able to have so many doors open in the first place, not that such discussions are the most easily digestible ones to have in front of millions of eager listeners trying to understand why they are struggling to get ahead in their own life.

Anderson’s father, Wyatt Emory Cooper, was Gloria’s fourth husband and he died in 1978 from a heart attack when Anderson was just 9-years-old.

Then again at least to Anderson Cooper’s credit, the journalist did turn up and has put on a good fight and made the type of headway that he was destined to make given the advantages he had, unlike many others who so easily squander their easy access, inheritance and good fortune.

Don’t you wish you had a legacy to trade off on in your aspirational career pursuits too?