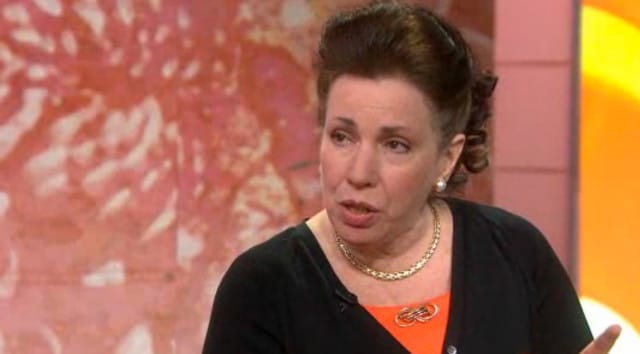 Kids it’s time to take our social etiquette cues courtesy of Princeton Mom, Susan Patton who this morning was on NBC’s Today show reminding us all what ought to constitute a happy woman. A happily married woman that is. Happily married to a winner who has his ducks in line. Which of course if any sensible college woman looks carefully enough will find a treasure trove of prospects in front of her.

Princeton’s Susan A. Patton wants you to marry her son or else.

Contemplated Today host, Savannah Guthrie of Princeton Mom’s new book ,   ‘Marry Smart’ that she had come along to plug.

‘You should devote 75 percent of your energies to man hunting, and a mere 25 percent on professional development. “Doesn’t that seem a bit out of whack?”

Smiled Susan Patton knowingly back to the universe: ‘Work will wait. Your fertility won’t.’

Which is to suggest by the time a woman is in her 30’s all the good ones will be gone and who knows a woman in her 30’s will have to fight against the younger batch eyeballing the next masters of the universe.

Referencing a passage in Princeton Mom’s book in which she advises women to get their ‘major body work‘ done whilst they’re still at high school (Susan Patton knows best kids), Princeton Mom responded without missing a beat: ‘If you enter your college years not in your best form, not feeling as good as you can feel about yourself, you’ll hamper your own chances for personal happiness as well as professional success.’

Which ought to remind us once again the value of a woman is always conditional on her ability to look and behave a certain way, because us men are a discerning lot with our unquenchable standards of excellence that women need to observe if they’re to ever get ahead in life.

But then again what do I know about biology and the primordial needs of men and women? That’s why we ought to read Susan Patton’s book for a finesse assessment of such awkward etiquette issues.

Then we came to the awkward topic of date rape in which Princeton Mom warns young woman not to wear hot pants because you’ll only incite the poor randy boys.

Well not literally but this is what she did say:  ‘It’s all on them to not put themselves in a position where they are vulnerable to being abused or mistreated by a man,” she added, suggesting that, ‘It’s dangerous to say to women that you can count on men to act responsibility.’

And as Savannah Guthrie is forced to wonder to herself how to manage with the silly Milly that is Princeton Mom, Susan Patton wafted to the side of her chair, held her new book out and smiled out to America, reminding Savannah and all the young women out there in desperate need of positive role models:

‘I’m not a provocative person. I’m an honest person,’

‘I absolutely believe with all my heart this is solid and good advice.’

Solid advice that will cost you your femininity….

Below video courtesy of TODAY