Imagine a world where reality shows do not feature Kim Kardashian or Jersey Shore, but follow the thrilling life of theoretical physicists cracking the ultimate code the universe is written in; no more cruising along on Rodeo Drive with fabulous Ms. Vanderpump, but following scientists as they turn on the most powerful machine ever conceived by the human mind, to unveil such code… How would the world be if our role models were rockstar scientists?

Your stereotyped view of a scientist’s life might be that of underwhelming days spent in a lab, muddling through a dry, emotionless routines. Dozens of grad students packed in labs, like an army of robots, computing their lives away year after year. Nothing could be further from the truth…

“Imagine being able to watch as Edison turned on the first light bulb, or as Franklin received his first jolt of electricity.” It is that fleeting moment of truth, and the angst and trepidation that leads to it, that fuels a scientist’s life.

In the mind-blowing flick “Particle fever,” now screening at Film Forum,NYC (and other theaters) Mark Levinson, a particle physicist turned filmmaker, gives us a stunning portrait of the ongoing internal struggles, great triumphs and crushing defeats that make up a life in science.

Levinson and his crew followed the lives of a bunch of physicists for five years. Starting off at the last stages of construction of the Large Hadron Collider in Geneva, Switzerland, all the way to the grandiose discovery of the Higgs boson, the holy grail of particle physics, which led to a series of Nobel Prize awards for some of the characters portrayed in the movie – while at the same time crushing many others.

Higgs boson. Is this evidence of the God particle we’ve all been waiting for?

Dark Matter and Champagne: the achievements of the Large Hadron Collider.

The movie alternates breath-taking footage of the experimental apparatus – which is nothing shy of a Star Trek production, plus it actually exists! – with the personal drama of scientists whose reputations and lifelong achievements hang on the next experimental finding. The stakes could not be higher: the results of the experiment will determine the ultimate theory of the universe.

Do we live in a cosmos that is dominated by elegant symmetries (actually, supersymmetries, as we physicists like to call them)? Or is our universe just a tiny island of order in a vast and inhospitable landscape of parallel universes? Or maybe none of the above is true, and Mother Nature is hiding her dice inside a proverbial black hole?

If you like The Big Bang Theory-kind of humor, you won’t be disappointed, as the movie is not short of hilarious moments. Like, when David Kaplan and Nima Arkani-Hamed, celebrated particle physicists, after staring for a few minutes at an outdoor contemporary art exhibition, in Princeton, NJ suddenly decide that there’s plenty of room for improvement. And spend the next hour rearranging the exhibition, moving pieces around, luckily unnoticed, until they finally claim: “It looks so much better now!”

“When the results of the experiment are in, I’ll find out if my theory describes the actual universe we live in, or I just wasted the last fifteen years of my life pursuing a delusional path,” says Nima Arkani-Hamed. 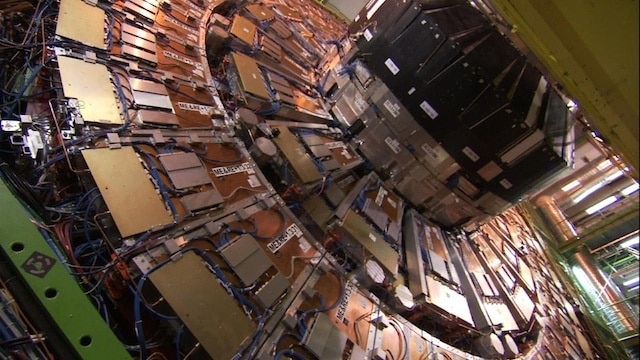 In the movie, you’ll get a unprecedented glimpse of the ego-wars fueled by such high stakes, like, for instance, when Stanford physicist Savas Dimopoulos candidly admits that he only writes articles with at most two co-authors: “Any article might be the Nobel Prize one…”

As Dimopoulos says of both science and of art, “the pursuit of these things, not really necessary for survival, is what makes us human.”

And if your lucky, you may hit one of the Q&A sessions at the end of the show, and get to ask the director and some of the featured physicists about the meaning of life, the universe and everything.

Or, more mundanely, ask Savas the million dollar question: “How does it feel to be a rockstar scientist?”

“It was annoying at first, having cameras following me to the bathroom for months… But then I got used to it!” replies professor Dimopoulos, with his characteristic Greek accent, “and now that Mark [Levinson, the director] is gone, I kind of miss it.”

The movie is running at Film Forum, in Manhattan, until March 20th, and it’s been a smashing hit, most shows being sold out. Don’t miss your chance to see the making of the most amazing machine ever built or, as Savas puts it, “the most noble achievement of humankind.” 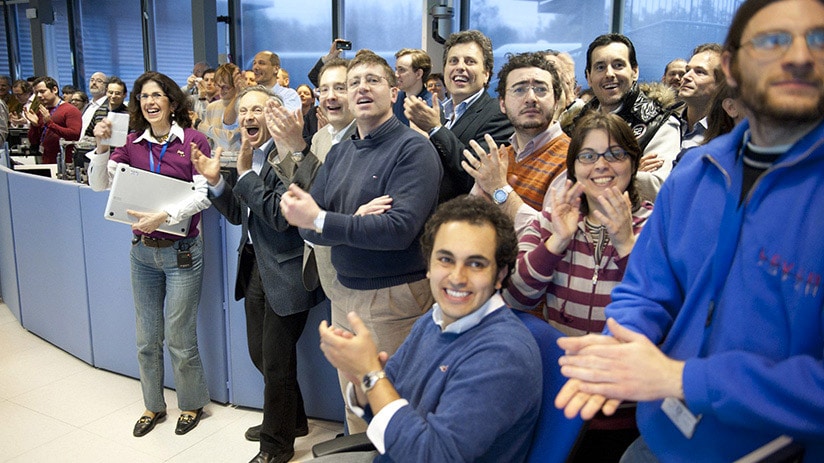