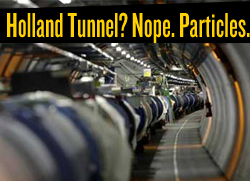 It may all sound like the plot of a Dan Brown novel, but it seems that fact is now, if not actually more exciting than fiction, definitely getting there. Scientists at the Large Hadron Collider at Cern near Geneva are celebrating after the machine broke energy records overnight to become the most powerful particle accelerator in the world, reports the Guardian.

The $10 billion machine, which, as far as we can work out, smashes subatomic particles into one another at unprecedented speed in order to see what happens, occupies a circular tunnel 27 km long beneath the French-Swiss border. It was restated ten days ago after more than a year out of action, and in the early hours of this morning it successfully accelerated two beams of particles to 1.18 trillion electrovolts (Yes, obviously, I know exactly what that means), establishing the collider at Cern as the most powerful in the world.

Inside the particle accelerator, two counter-rotating beams of hydrogen nuclei are whipped up to more than 99.99% the speed of light. At four points around the machine the beams are crossed, steering the particles into high-energy smash-ups. The collisions recreate in microcosm the conditions that existed moments after the big bang.

The next job is to start sifting through the subatomic debris in the hope of finding particles new to physics, including the elusive stuff of sci-fi movies, dark matter. So it really is quite a big deal.

The project’s manager, Lyn Evans, has said that there is a lot more work to be done. “We are about to move into a new energy regime, and when we do that we can start to see new things.” Cern’s director, Rolf Heuer, said “I am keeping my champagne on ice until then.”

This is where we concentrate very hard and try to give the impression that we understand all of the above.