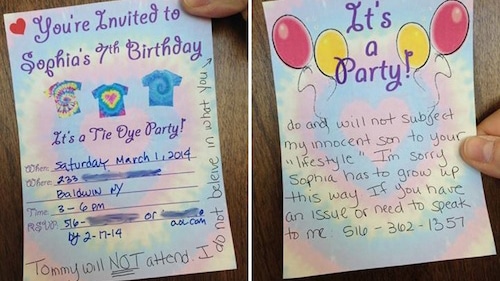 Update on February 15: It now appears this story was a hoax perpetrated by the radio hosts who featured the alleged anti-gay invitation. On the K983.com website they write in part:

On Wednesday, we told you the story of Sophia’s birthday party, and one parent’s objection to the same-sex household of Sophia’s parents. We also posted the invitation on our Facebook page, and invited comments from our followers.

This story was, in fact, totally fictitious, and created by the two of us. This was done without the knowledge of K-98.3 management or ownership.

A pair of gay dads have been left dumbfounded after receiving a terse letter of rejection from a parent after sending birthday invitations for their seven year old daughter’s upcoming birthday party.

‘Tommy will NOT attend.

‘I do not believe in what you do and will not subject my innocent son to your “lifestyle,”

‘I’m sorry Sophia has to grow up this way.’ Incredulously the woman then leaves her phone number, ‘If you have an issue or need to speak to me.’

The gay couple outraged, would then hand the note to their local radio station K 98.3 who in turn (naturally) posted in on their  Facebook page.

Beth’s phone number was initially blurred from the picture, but the radio station removed the blur and said, ‘Beth gave us permission to post her phone number and said anyone who has a problem with what she wrote can call her, too!‘

Needless to say the overwhelming respondents on Facebook have gone on to condemn Beth for her homophobic stance with a variety of commentators posting the following:

Wouldn’t a simple, “I’m sorry but Tommy’s busy” have sufficed?

Poor Tommy- having a mother like Beth! I’d love to hear her explain to Tommy why he can’t go to Sophia’s party… because Jesus!

To the woman who penned the homophobic rant:

In your self-righteous rage, you may have thought you were sending a message to the two men who sent the invitation, but what you really did was intimidate and humiliate a seven-year-old girl. Kids are not stupid. Do you think the child does not know what you did? If your concern really was for your son, you should have simply declined politely and left it at that. Going off on a rant the way you did showed a total lack of class, manners, and decency.

I hope your arrogant, self-righteous self is satisfied that you had to stoop to humiliate a little girl to appease your God. Whom you do not really know; the God you claim to worship is a sadistic monster and you did a great job in emulating that.