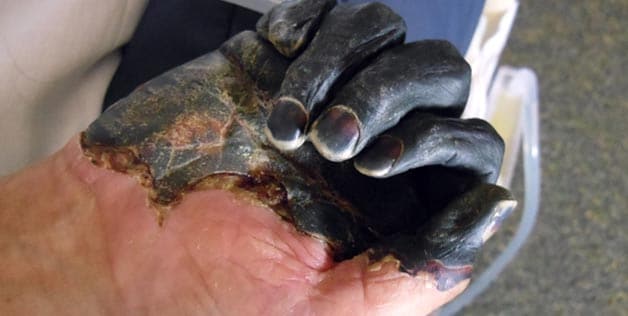 A retired welder, Paul Gaylord, 61 has described how he came hours from dying after contracting bubonic plague from a cat bite.

In horrific detail, the Oregon mag recounts how the symptoms of the ‘Black Death’ came to overtake his body, leading to his hands turning black.

Upon having contracted bubonic plague, Paul Gaylord would go on to spend nearly a month attached to a life support machine.

The first signs of the disease involved the man experiencing respiratory problems before it moved on to consume all his vital organs, causing his lungs to collapse and his heart from beating.

So dire had the man’s condition become that doctors had discussed switching off his life support machine the day before waking from a coma. In total, Gaylord had spent 27 days in a coma during which time his hands and feet swelled up and began to turn black.

Told Paul Gaylord at the onset of his condition via the UK’s guardian: ‘Hooked up to a dialysis machine, I had collapsed lungs and at one point my heart stopped… Technically, I shouldn’t be here.’

‘My doctor told me I had developed all three stages of the plague: bubonic (the least lethal form, which infects the lymphatic system), pneumonic (which infects the lungs) and septicaemic (the bloodstream). Some people have survived bubonic plague, but not all three, apparently.’

Paul Gaylord came to be infected in June, 2013, when he tried to remove a mouse from the throat of a choking cat.

The plague-stricken cat bit him. Within 48 hours he began to suffer flu-like symptoms. Soon his skin started to turn grey and the glands under his arms swell to the size of lemons.

Told he faced a life of dialysis because his vital organs were too badly damaged, the retired welder underwent one treatment before his body regained its functions.

Although Paul Gaylord managed to come back from the brink of death, he was ultimately forced to have several fingers and toes amputated. Yet perhaps what was equally gruesome was the fact that doctors had to wait  a couple of months once the man was well enough to return home to see which digits were well enough to save and which had to be amputated.

Told Paul Gaylord: ‘I still have my hands and part of my thumbs. They took off all the toes on my left foot, and about a third of my right foot is gone,’

‘It’s hard to believe it happened to me, but rather than feel depressed, I’ve always felt positive and happy to be alive.’

Without treatment the plague kills around two thirds of infected humans within four days. It causes an infection that kills cells, causing gangrene which also often results in amputation.

Symptoms of the plague in humans, which typically appear within four days, include fever, chills and a bloody or watery cough.

In animals, it presents itself with enlarged lymph nodes under the jaw, as well as fever and tiredness.

Notes the UK’s dailymail:  Recent research suggests that the bubonic plague is on the increase in affluent communities in the U.S..

It used to be associated with squalor, unsanitary conditions and rodent infestations.

But as more people move to natural environments where carriers such as ground squirrels and woodrats live, infection increases

The disease is caused by the bacteria Yersinia pestis that is spread through flea bites.

17 people have been infected by the disease in Oregon since 1934.

The Black Death and wiped out an estimated 200 million people in Europe during the 14th century.