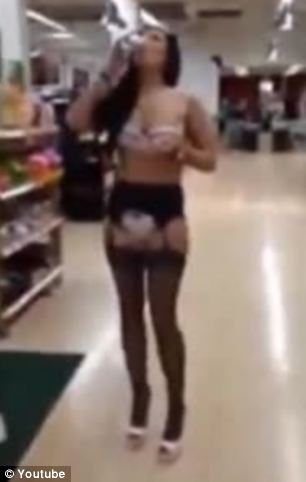 Rebecca Dagley might be the in the running as the star NekNominate nominee after stripping down to her underwear in a supermarket whilst downing a beer.

The entire incident went on to be caught on video as the 19 year old British youth set about fulfilling her dare devil NekNominate act.

With a friend close by training a camera on Dagley, the camera watches her as she casually walks into an Asda, Leicester, UK supermarket in a beige trench coat.

Proceeding to walk around the store before coming to a stop in the fruit and vegetables aisle the dare devil then takes out a Stella Artois beer, slides off her trench coat and proceeds to drink the beer wearing nothing save for a slinky lingerie set.

Whilst continuing to down the beer, wearing nothing save for just a bra , knickers and suspenders, stunned onlookers look on aghast. 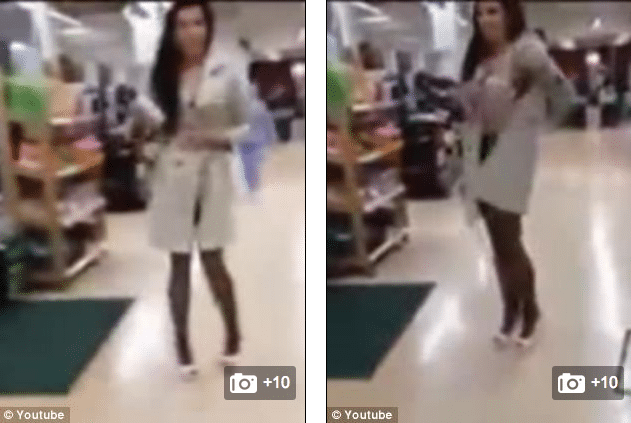 The act was to be captured on video by a giggling friend – who at the end of the footage nominates three more friends to take part.

Told Rebecca Dagley of her stunt: ‘I just found an aisle and tried to drink it before security came over.’

‘People were just looking at me like “what on earth are you doing?”

‘I didn’t want to do it at first but then I thought I should just have fun.’

‘Everyone will go as far as they want to, nobody is forcing anyone to do anything.’

NekNominate is an online craze where youngsters are chosen by their peers to down – or ‘neck’ – strong drinks before challenging others to film a more shocking video within the next 24 hours.

Participants often upload the footage onto the internet. 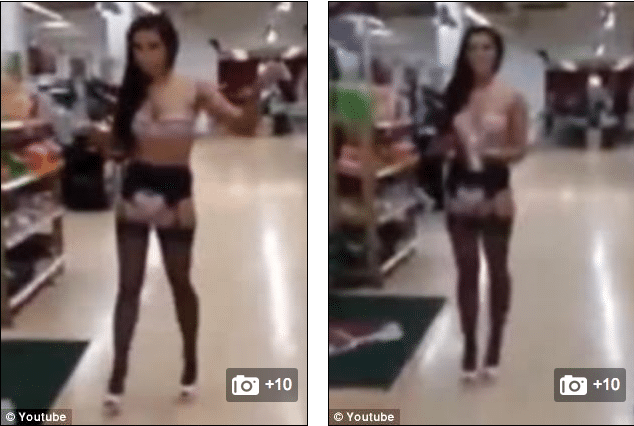 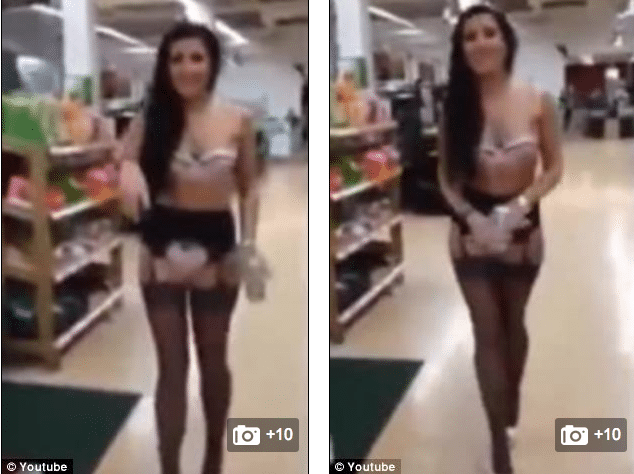 In some instances, teens can be seen downing ‘dirty pints’ – or concoctions of alcohol and other substances – or large amounts of strong spirits as part of the dare.

Last week, footage of one young man from Derby drinking a live goldfish as part of the craze took off.

The craze is said to have started in Australia last month and has now swept the globe – with thousands of British youngsters taking part.

While NekNomania has its abundant fans, experts have since condemned the game.

T0ld Dr Sarah Jarvis, medical adviser to alcohol education charity Drinkaware: ‘Young people often say they feel peer pressure to drink to fit in, but competitions to drink excessively in a short space of time can be dangerous and this should not come as a surprise.

‘Quite apart from the risk of accident or injury as a result of drinking to excess, there is another aspect to these online drinking games which is the ‘cyber shame’ some young people may experience.

‘Drinkaware research shows nearly half of 18 to 24-year-olds admitted ‘un-tagging’ drunk photos of themselves on Facebook that they didn’t want others to see.’

Retorted Rebecca Dagley of the criticism heaped on the craze:

‘Everyone will go as far as they want to go, nobody is forcing anyone to do anything – people don’t even have to drink alcohol if they don’t want to.

‘It’s like anything in life, you have to be responsible and not stupid.

‘Some of the older lot, who are past it, need to remember, they were young once.’