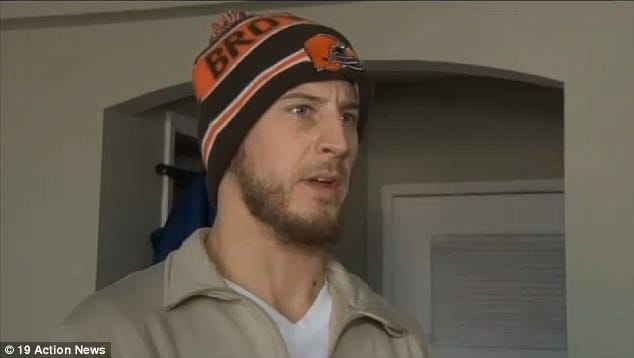 Matthew Robinson, a disabled veteran had the indignity of being robbed and beaten up by up to 8 teenagers as he got off a Cleveland, Ohio bus. During the assault, the teens shouted racial slurs at him.

Since the assault, which came to happen Friday week ago, cops have arrested three teenagers.

Apprehended were Kenneth Matthews, Ronald Reid Williams and an unnamed 16-year-old girl who allegedly filmed the assault on her cellphone.

The incident came to pass when the disabled veteran, also a college student, got off a bus he had been traveling when he was met up by a group of teenagers who had gotten off the bus with him who then took to beating Matthew Robinson as well as stealing his belongings, all the while yelling: ‘Knock that white boy out!’

Bystanders in the Public Square where the scene played out refused to help him. It is not reported whether they too were colored like his aggressors. Some have wondered if the aggression was in fact endorsed by onlookers who may have come to feel an aversion to white folks in the disenfranchised area.

‘The whole time I’m just thinking, pretty much protect myself and don’t let anybody in behind you. No-one stepped in to help, so I thought it was a shame.’

‘No-one should have to deal with that kind of racism or ridicule. ‘

‘I think there should be jail time for assaults. Who’s to say that your mother or sister couldn’t be on the bus, and the same thing could happen to them.’

19 Action News would go on to report, that one of the assailants, Kenneth Matthews was recently busted for trying to steal a woman’s cell phone at the West 25th Rapid Station.

The youth was also charged for trespassing at Tower City after police repeatedly told him to move on.

Police said two of the teens who were arrested were 18 and 19-years-old.

According to police, violent groups of teens hanging around Public Square has become a growing problem.

Cops regularly patrol the area in a bid to quell any violence after a teen was brutally beaten on the square last month. At present cops have not told what led to that beating taking place.