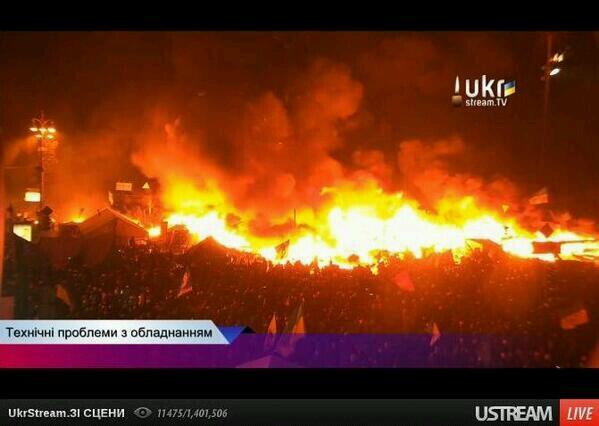 Tensions in Kiev, Ukraine have escalated in the wake of the death of 18 protestors as the city braces itself for continued disarray.

The deaths came as riot police advanced onto a central Kiev square occupied by anti-government protesters as the three month stand, EuroMaidan against strong arm pro Russian President Viktor F. Yanukovich took a turn for the worse this evening.

As the city’s heart burns relentlessly deep into the night, Yanukovich has taken to meeting Ukrainian opposition leader Vitali Klitschko in the hopes that a quelling of the violence and protests may ensue. Meanwhile protesters remain at Independence Square adamant that they will not vacate as riot police now wait to see what their next directive will be.

During the course of the day, protesters threw rocks and fireworks at police as vehicles broke down and burst into flames, trapping security officers inside and ‘prompting desperate rescue efforts from their colleagues,’ told the New York Times.

A sound system that had been filling the square with speeches and protest songs for weeks temporarily went down. Protesters would eventually restored the system, and the volume is once again up as protesters settle in for another evening at the square, ever mindful that they might just call Yanukovich’s hand.

The protests came as a result of President Yanukovych freezing a trade deal with the EU in November, opting instead to take a hand out from Russia’s Vladimir Putin, with much to lose, offering the beleaguered nation a $15 billon bailout. This soon led to locals calling foul and a call to re affirm previous trade deals with the EU.

In deft continual posturing, Yanukovych continued to take on Russia’s assistance, by then $5 billion of bonds had been sold but then abruptly Putin suspended its payments. This then opened the corridor that the Ukraine rather than seeking an alliance with Russia could now reconvene negotiations with Europe as many have openly sought.

Yet whilst opposition leaders were meeting with German Chancellor Angela Merkel, Russia once again interjected itself, offering a fresh infusion of billions of dollars that Ukraine desperately needs to keep its ailing economy afloat. This would in turn lead to protesters calling foul and rooting deeper into the city square reaffirming demands for the President’s resignation.

Told Yuri V. Lutsenko, a former interior minister and an organizer of the Orange Revolution nine years ago at the onsets of the protests last November:  ‘I want the authorities to know that this is not a protest; this is a revolution!’

Moving to the present, opposition leaders stand firm in their commitment to force the President and his allies hand, with opposition leader Vitali Klitschko this evening urging protesters to defend the camp.

‘We will not go anywhere from here,’  Klitschko told the crowd, speaking from a stage in the square as fires burned around him, releasing huge plumes of smoke into the night sky.

‘This is an island of freedom and we will defend it,’ he said.

Many have heeded his call. 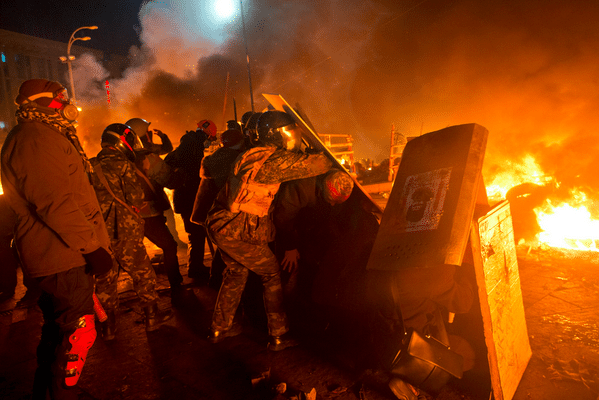 And in another emotional speech opposition leader Arseniy Yatsenyuk told the protesters: ‘We see that this regime again has begun shooting people; they want to sink Ukraine in blood. We will not give in to a single provocation,’

‘We will not take one step back from this square. We have nowhere to retreat to. Ukraine is behind us, Ukraine’s future is behind us.’

Yet whilst all that plays out, there have been other splinter opposition groups joining the fray, each with their own agendas, each sensing an opportunity to implant its own prerogatives, from far-right nationalists, hard-right antisemitic group Svoboda,  even more extreme groups, such as ‘Right Sector’, who demand a ‘national revolution’ and threaten ‘prolonged guerrilla warfare‘.

Of course the question on everyone’s lips is how much is President Viktor F. Yanukovich willing to concede, how far will Putin extend himself (he too has so much at stake), how far oligarchs who these days control so much of the nation’s resources and institutions be willing to concede, whom many accuse of bringing the nation to a crippling economic disarray along with inside political cronies, and perhaps just as importantly how much will the EU and especially Germany’s Merkell be able to demand out of the Ukraine if it agrees to come to its need, assuming of course that the Yanukovich doesn’t send out his forces once again to put a final once and for all stop to the protests. Something disparate opposition leaders have indicated they will fight to the core and then some…as all players anxiously look to the other before setting off on the next course of action.

And then there was this poignant analysis courtesy of the guardian that had me wondering as well:

But nor do the main opposition and protest leaders offer any kind of genuine alternative, let alone a challenge to the oligarchy that has Ukraine in its grip. Yanukovych has now made sweeping concessions to the protesters: sacking the prime minister, inviting opposition leaders to join the government and ditching anti-protest laws passed earlier this month.

Whether that calms or feeds the unrest will be clear soon enough. But the risk of the conflict spreading – leading political figures have warned of civil war – is serious. There are other steps that could help defuse the crisis: the creation of a broad coalition government, a referendum on EU relations, a shift from a presidential to a parliamentary system and greater regional autonomy.

The breakup of Ukraine would not be a purely Ukrainian affair. Along with China’s emerging challenge to US domination of east Asia, the Ukrainian faultine has the potential to draw in outside powers and lead to a strategic clash. Only Ukrainians can overcome this crisis. Continuing outside interference is both provocative and dangerous.