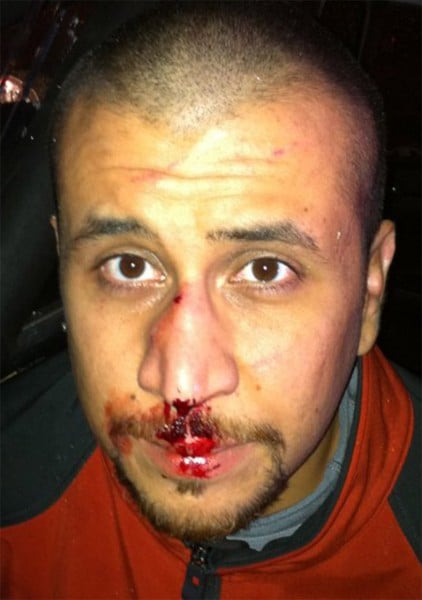 In an interview with Spanish speaking media outlet Univision which aired Sunday night, George Zimmerman revealed life since his acquittal of the murder of Trayvon Martin has been very bleak indeed.

In a sobering interview, George Zimmerman disclosed that he is $2.5 million in debt due to unpaid legal fees. That he has developed post-traumatic stress disorder. Wears a bulletproof vest and follows “safety plans” while in public. He also told of his fears of murdered. As well of the misery he feels as a consequence of not having a job or not being able to find one (alas bad media exposure does not always necessarily translate to good career trajectory). Zimmerman also told surprisingly that he does not have health insurance and to top of the misery Richter scale, he is now homeless. But as we all know he does have his freedom.

That said not all is lost, there are still a few paintings the former security guard can try to sell at too good to believe outrageous prices as well as submitting to the idea of allowing a washed up rapper to beat his ass in front of sold out venues. This after all is the giddy American dream with all its twists and curveballs.

Contemplates the much maligned George Zimmerman who half of America still believes ought to be behind bars for the murder of an un armed teenager he shot to death:

‘Honestly, I [would] love to live a calm life without being in the press. I’d like [to be treated like] any American citizen,’

‘Have a ticket or an argument [and] not have everyone aware. But that’s my life and I do not understand why that is.’

Curious to get a handle of what commentators on the web thought about George Zimmerman being down and out, I came across these somber reflections:

Afraid to walk down the street without being shot, afraid of the police, discriminated against for employment, feared and hated by people he’s never met. I don’t think Zimmerman wanted to understand the plight of black Americans quite this intimately.

I’ve never understood why he doesn’t just leave the country. I understand the “true American” schtick that he puts on, but it seems pointless at this point. Pack up your shit and leave the country. Peru maybe? I know it runs counter to American exceptionalism, but you can lead a good life in many parts of the world. If I was under the scrutiny he was under I’d be outta here as quick as I could buy a plane ticket.

So much for electing to be the town hero (who got to have his very own real gun) going around rounding up all them ‘undesirables….’ The irony is too cruel and bitter, but there’s always a book deal to be had…?

combination of laziness, fear, and bigotry. This was a man who’s number one accomplishment in life was providing (unsolicited) security for a gated community from unarmed black teenagers. I hardly doubt, given his mental acuity and complete lack of self-awareness, he’s even capable of recognizing how fucked he is

I’d have more sympathy for him had he shown any remorse after killing Trayvon. He doesn’t have to feel guilty, he can believe he was defending himself against the kid he stalked while carrying a weapon, but ending another’s life is generally something that creates some regret. Lacking that regret is generally the mark of a sociopath.

George Zimmerman is an abject failure as a man and a complete loser.  George Zimmerman has amounted to nothing of significance and done absolutely nothing with his life and likes to make himself feel better by beating women, animal abuse, road rage, bullying people and pulling gun on people like a ups man and pretending to be a police officer, walking around town with his gun and standing his ground. Shellie Zimmerman said that she had left her husband George the night before the shooting. If you don’t know anything about domestic violence statistics, this might not have set off any alarms. Shellie leaves George and the next night, he’s out on the streets looking for someone else to control and abuse, as a substitute for his wife, whom he can’t control at that moment. Nothing irks an abuser more than having control taken away, even for a moment.Told police he was going to Target that night to go shopping. But had no money or a credit card.Chasing a kid in the dark of night with a loaded weapon. zimmerman was up to no good and he’s on drugs the night he kill trayvon.  He is nothing more that a piece of garbage, pond scum and without a doubt hunted Trayvon down, threatened him and shot him dead He’s a keen boxer/fighter, but he couldn’t defend himself against an unarmed 17 year old boy He think it makes him feel like a big, tough, brute man.s  copied image  for his photo applied to canvas  taken from Shutterstock without attribution  and ripped of Rick Wilson and the Associated Press’ image..George Zimmerman himself understands that the American Judicial System doesn’t work. George Zimmerman is still armed and theoretically dangerous. Zimmerman is an irresponsible deadbeat who murdered a kid. George Zimmerman Is a Coward. Liar. Murderer.

Yeah, he wants a private life so bad he’s giving an interview about it.