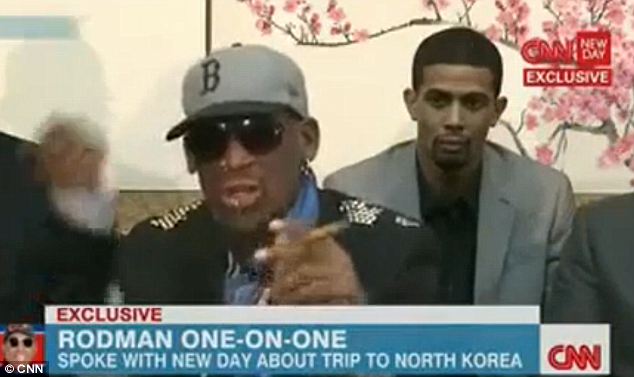 Kids I’m still trying to reel my head on this one, but what do I know about self sacrifice, the ardor of being a much loved envoy of North Korea’s dictatorship and a fallen NBA basketball star?

But the shit goes something like this, whilst in the holy grail of North Korea to play basketball for emperor Kim Jong Un’s birthday, our collective hero, Dennis Rodman took time out to scream and rant at CNN’s Chris Cuomo.

Cuomo sets Rodman off (what drugs, pipes, good shit and special Scotch our hero has consumed is beyond our mortal understanding) by asking aboutKenneth Bae—the American imprisoned in North Korea on vague charges—and whether Rodman would use his close relationship with Kim to push for Bae’s release.

Then Rodman goes into overdrive. What next comes out of his mouth defies sensory overload and the calm trickle of the good shit pouring out of Dennis Rodman’s tainted pores.

We hear Rodman scream about sacrifice, accuse Cuomo of not having anything at stake (but does Dennis?) From there our hired birthday decoy tells Cuomo that he doesn’t give a “rat’s ass” what Cuomo thought anymore, all while pointing his loaded cigar at Cuomo from the other side of the world.

Eventually, our hero settles down and lets the much calmer Charles Smith explain the player’s “non-political” stance to Cuomo, but not before yelling for a solid two minutes or so.

Elsewhere in the interview, Rodman describes Kim the merciless emperor as his friend. “I love my friend,” he said. “[Kim] is my friend.” And naturally one assumes Kim Jong Un loves Dennis….