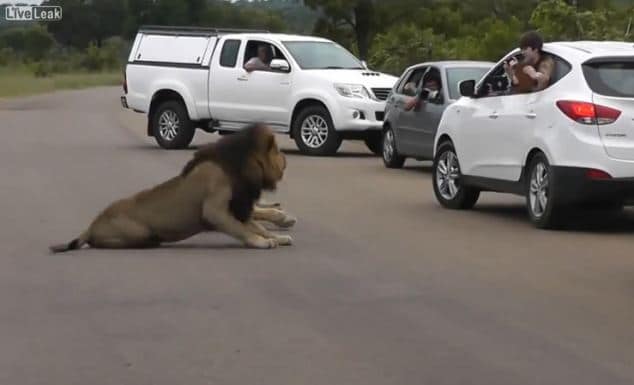 Images of a lion turning on a pair of children hanging out of their car during a safari are making the rounds.

The children, a boy and a girl were allowed to get within feet of the predator animals in Kruger National Park, South Africa.

As fortune would have it, the lion after growling and lurching at the children simply turned and left the scene with its female companion.

The  scene unfolded as the car carrying the children pulls up close to the lions after another vehicle had moved on.

From there the children proceed to use a camera and a tablet device to photograph and possibly video the creatures. Another electronic device is visible poking through the front window.

A minute after the car parked, the male lion jumped up towards the children – who ducked back into the car, but continued to film the lions with the window open.

Luckily, the lions, which were surrounded by a group of vehicles watching them, turned around and left the area.

Commenters on the video, uploaded on to Live Leak yesterday, have condemned the adults in the car for allowing the children to get so close.

The user who uploaded the clip said: ‘This is very irresponsible behavior by the parents of these children!

‘Please obey all rules if you visit a wildlife park! These animals are not tame and will attack if provoked!’

Commenters on the video also criticized the behavior. One said: ‘By the time the parent behind the wheel had even put the car in gear that lion would be using a tooth pick.’

Another added: ‘Those kids were lucky! Those cats could have leaped in and killed them with one swipe of the paw!’

A third said: ‘That lion could have jumped up and grabbed one of those kids in a split second.’

Which posits the question, what exactly did the children think they were photographing and could it have something to do with media dumbing down and taking the ferocity of real life wild life animals and turning them into slogans, cartoons, adverts and tv characters that unsuspecting individuals may have a rude shock in store when these creatures revert to acting to their nature. As opposed to acting to some fantastical manufactured image of wider consumption.