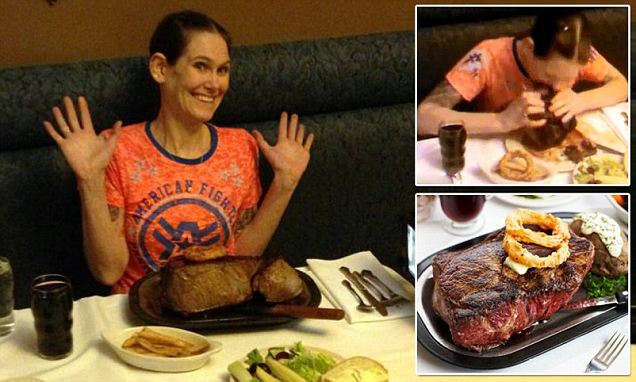 Kids I have to admit I’m a mad fan of steak, in fact I eat steak when I wake up, when I’m nibbling on a side of cashew nuts and even when I’m resting my head on a pillow, there’s always a pound or two of steak drizzling into my soul. But that shit is chicken shit compared to Molly Schuyler of Nebraska who really knows how to love steak and how….

It all came to be when Molly undertook the challenge of wolfing down a 72oz steak at Sayler’s Old Country Kitchen in Portland, Oregon on January 3rd in her bid to earn herself a spot in world records. Not for comportment. Not for elocution. Not for her finesse. But rather for her ability to slam damn that piece of meat in record time. Which of course is what Molly nailed in a mere 2 minutes and 44 seconds.

But unlike more refined palates, Molly did away with the steak knife and fork thing, understanding like yours truly that good beef always tastes better tightly squeezed between your knuckles as you furiously wrestle with it to get it down the hatch in record time.

So good was Molly at the beat the steak to a pulp inside my mouth thing that she managed to beat the previous record of snaring a 72 oz steak of 6 minutes and 48 seconds by more than half.

Yet what made me smile is upon shaming that mockery of a steak, Molly proceeded to down it with a handful of fries, cause in Molly’s eyes, a good steak always requires good fries, never mind the size or effort one expands eating a meal normally reserved for a pygmy tribe during a wedding ritual.

Asked about her special killing in the mouth skill set, Molly Schuyler demurred that shit is an ‘unexplained phenomenon.’

But she did say she thinks it’s probably just a stupid human trick.

As an aside Molly Schuyer went on to compete in more than 20 different food eating contests around the country in 2013 around the country, devouring things from beef patties in record time, colossal sandwiches made of pork, chicken, bacon and the aroma of your sweat as you watched in the background in wanton lust.

For those curious the steak eating challenge was set up by the owners of the Sayler’s Old Country Kitchen in 1948, little of course did they imagine that Molly and her appetite would one day make their presence known.

And then there was this too that put Molly’s feat into perspective too: Participants receive a free meal if they eat an entire 72 ounce steak and sides in under an hour.

Kids, isn’t it time you started nibbling at a jumbo slabs of meat here and there too? No forks or knifes needed…