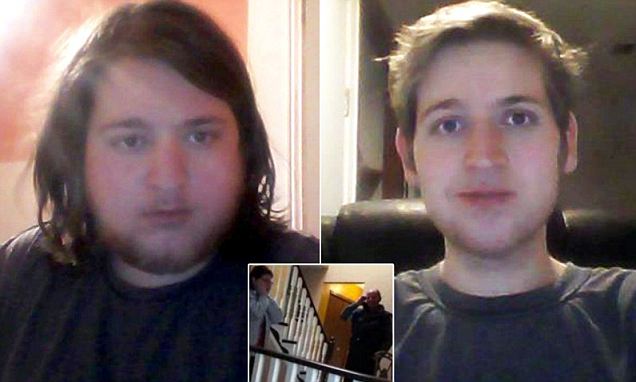 Imagine the conundrum of being Lucas Irwin’s parents and giddily awaiting for him to drop by after a long absence of a year. Bear in mind the last time you as his parent laid eyes on Lucas was as an unkempt, slovenly and slightly overweight (okay, very overweight) schlep.

Keep that thought in your mind as Lucas Irwin knocks on the door as you begrudgingly go to answer the door and get ready to faint once you open that door….

Reports today: Lucas Irwin surprised his family with a holiday gift they just couldn’t believe: Without mentioning a peep about his determination to lose weight after years of struggle, the 300-pound young man slimmed down to a trim 170.

Keeping his year-long effort a secret from his family made his big reveal — caught on video now going viral —extra special.

Kids are you giddy, foaming at the mouth, impressed that such large changes can actually happen in your life too?

Told our new found hero Lucas Irwin on the Today show: “I only go home once or twice a year, usually once in the summer, once for Christmas,”

“And I made up an excuse not to go home over the summer just so they wouldn’t see me.”

So how did Lucas feel the moment before the unveiling of the curtain?

“When I saw my parents for the first time, I was really nervous,” he said. “I was shaking and … it was very surreal.”

To Lucas’ delight, his parents were overjoyed, and the video (prepare to blush as you intrude on a very private sloppy but lovable moment below) shows their expressions of happy disbelief as they first laid eyes on him.

Told Jeff Irwin, Lucas’ dad: “All of the sudden, down the stairs he came,”

“And he looked just fantastic. I was more stunned than anything else. But inside, I was just beaming. I was just … I was over the moon.”

Beaming because Lucas finally did something to better himself and you dad weren’t required to smash your head in frustration and yet then again you were probably happy to take Lucas back any which way but secretly you always hoped for the day Lucas would transform himself into a lithe clean cut preppy healthy type of guy that you could point out indiscriminately to at strangers.

And what about Susan Irwin, Lucas’ stepmother. How did she take Lucas’ sudden about do?

“Just picturing it in my mind again, it brings back tears to my eyes again,”

Kids tell me if Susan isn’t eyeballing her Rolodex and thinking which bride she can now pawn her step son to.

In going to lose 130 pounds, Lucas kept to a strict eating regimen. He kept a food diary, memorizing every calorie and atom that passed through his mouth.

Told Lucas: “I lost 95 percent of the weight just through changing my diet,”

“I only ate 1,350 calories a day. I didn’t exercise at all until maybe seven or eight months in.”

Although declining the support of his family, Lucas tells he did turn to the Internet for backup.

“Social media was amazing for my weight loss journey,”

“Especially the Reddit ‘LoseIt’ community. You can post your progress and they would help with diet tips and that sort of thing.”

Irwin said he made the pledge to himself about a year ago to lose weight.

“It’s something that I have struggled with all my life,” tells Irwin Lucas, “So I started December the 28th of 2012 and just went for a year.”

Isn’t it time you also exercised some control and discipline in your life and finally became the person you are so capable of being? Your loved ones might thank you for it, better still you will probably thank yourself. Right Lucas?