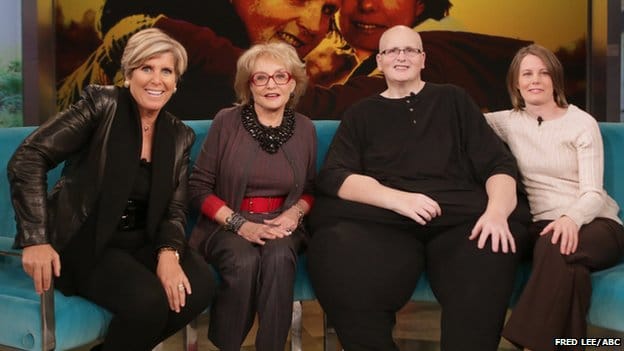 Paul Mason, a 53 year old British man who was once declared the world’s fattest man is set to marry his 112 pound sweetheart Rebecca Moutain after the Orange, Massachusetts 40 year local proposed to him live on The View yesterday.

Asked to marry her, the gobsmacked Mason who at one stage weighed 1000 pounds before dieting and surgery helped him trim weight immediately said yes.

In expressing his joy at the marriage proposal the former postman who now weights 308 pounds vowed to get into the shape of his life for their big day, saying: ‘I don’t want to go down that aisle in a wheelchair.’

After the engagement was made the show’s host surprised the pair by telling it would donate the amount needed to fund surgery to remove excess skin following Paul Mason’s dramatic weight loss.

Asked if a date had been set for their wedding, Rebecca Mountain told The View: ‘There’s so many things we need to do to take care of Paul first.

‘There will be another surgery for his legs but not for another six to eight months.’

The engagement comes off the back of the pair falling in love online following Paul Mason’s impressive 672 pound weight loss thanks to NHS surgery.

Paul Mason flew to the U.S. in December to spend Christmas with Miss Mountain, and also for a consultation with a New York-based plastic surgeon who had agreed to carry out the procedure for free.

Dr Jennifer Capla agreed to donate her time to perform an operation to remove the excess skin from Mr Mason’s belly and arms, meaning that he and Miss Mountain only need to find the cash for his hospital stay and drugs.

That’s where The View stepped in for Mr Mason’s second surprise, as they offered to stump up the $17,000  he needed to cover the medical expenses.

Told Paul Mason said: ‘I’m excited, all I’ve got to do is go back to the UK, get a medical visa, and then come back.’

The pair first got to know each other May of last year after Rebecca Mountain reached out to Paul Mason via Facebook after she saw a television documentary about his extreme obesity.

Appearing on UK breakfast television programme last November, in the week they met in person for the first time after months of skyping, Mountain said she ‘just felt compelled to reach out and just try to help and that’s all it was.’

‘I have a lot of drive and just thought I could write letters and support,’ she said. ‘Things I set my sights on, I just go and do. I just knew that I should try and help.

‘He’s incredible, a genuine person. Incredibly honest and open about the difficulties he’s been through, which helped our relationship.’

Paul Mason’s binge eating began in his 20s at the time of his father’s death and a deterioration in his mother’s health.

He soon quit his job as a postman after his weight stopped him from finishing his rounds.

As his weight soared Mason was left unable to stand or walk before finally becoming bed-ridden and being looked after full time by council carers.

At the height of his food addiction, Mason was eating an entire packet of bacon, four sausages and four eggs complete with bread and hash browns for breakfast.

He would then eat quadruple portions of fish and chips along with two kebabs for lunch followed by a roast dinner, curries or pizza and more chips in the evening.

It wasn’t until a NHS operation to fit Paul Mason with a gastric band that Mason’s huge weight gain was dented, nevertheless his life was left on hold as he waited for further surgery to remove the excess skin it left behind.

Now he and Rebecca Mountain hope that after The View is broadcast in the U.S. on Friday, the publicity surrounding it will help them raise the rest of the cash they need for the aftercare following his surgery.

Interestingly many on the web have gone to wonder what necessarily drew Rebecca Mountain to a man she had never met who at the time of her reaching out to him was undergoing staggering challenges in his life. Asked what compelled her to Mason, Mountain told she was intrigued by his commitment. A commitment that for some reason Mason had kept latent for a large part of his life.