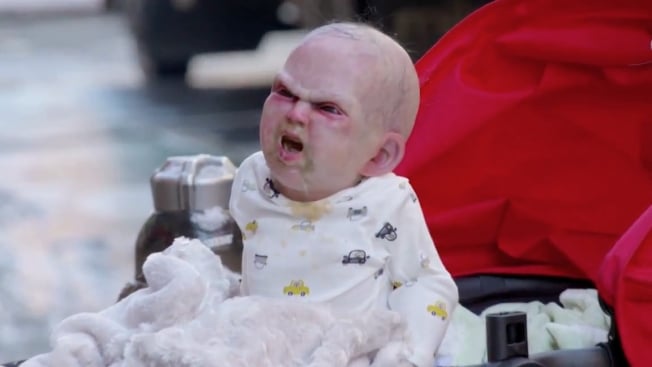 The marketing promo caught off guard stragglers who thinking they were attending to a vacant baby pram on the sidewalk would find instead to their horror were tending to an infant exorcist.

Sometimes hissing, sometimes vomiting, the ensuing video footage of New Yorkers being shocked by the devil baby attack would eventually find itself as part of the film’s marketing retinue.

The marketing ploy relies on human being’s general good nature to help what appears to be a whimpering abandoned child only to find that they have been duped into witnessing a horror show that can never be unseen.

Most jump for dear life, shriek, convulse and a few fall to the ground, with the occasional street-walker nonplussed by the visage of a hissing devil baby suddenly sitting upright, spewing fluid onto the heavens as it rises like a sphinx from under its covers.

Naturally it’s not what one expected to find and the act of letting one’s guard down (after all how nasty can an abandoned baby really be?) sets up for the intense delight as one watches unsuspecting souls fly back a few thousand miles.

The promotional video is the creation of New York-based company Thinkmodo, (responsible for last year’s run away hit Telekinetic Coffee Shop Surprise, see below) who offer a behind-the-scenes look at its construction in the YouTube video. Since the introduction of the video which has gone viral (2.6 million hits as of publishing) some have questioned whether the gorilla marketing campaign has gone too far.

Reflects theweek:  You can’t really fault Hollywood marketing teams for embracing this kind of “viral video,” even if they have rendered the very concept of a “viral video” sort of meaningless — why don’t we have a better word to describe a “viral video” that hasn’t, you know, had the chance to go viral yet?

What’s more troubling is the fact that so many media outlets are willing to play along with them. Like “Telekinetic Coffee Shop Surprise,” “Devil Baby Attack” doesn’t identify itself as a promotional video for Devil’s Due until the very end. But most of the outlets writing about the “Devil Baby Attack” — including Fast Company and Laughing Squid — don’t make it clear in their headlines that the video is essentially a glorified advertisement.

Thinkmodo founder, Michael Krivicka, told Yahoo News that he thought the project ‘was an interesting social experiment to see how many people would bother to check on an abandoned stroller.’

Devil’s Due is set for release this Friday. Isn’t it time you had the bejesus scared out of you too?