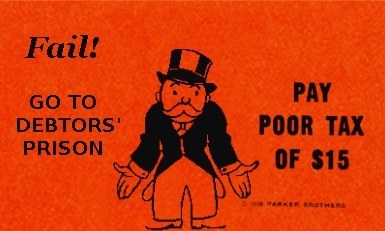 The US Supreme court has told that imprisoning an individual because they can not pay back a debt is unconstitutional but that isn’t stopping some judges from jailing people who can’t pay their court fines.

The practice of jailing debtors has long been abolished since the 1830’s but more than a third of states now allow the jailing of individuals who cannot or wont pay their debts.

The Brennan Center for Justice and the American Civil Liberties Union have been noting the proliferation of new debtors’ prisons in states like Missouri, Louisiana, Georgia, Michigan, Washington, Ohio and Colorado.

‘It’s a waste of taxpayer resources, and it undermines the integrity of the justice system,’ Carl Takei, staff attorney for the ACLU’s National Prison Project, told FoxNews.com.

The U.S. Supreme Court has addressed the issue on three separate occasions in the 70s and 80s, ruling that courts are not allowed to jail someone for unpaid debts if the person is indigent.

People who agree with the programs reason that it part of the government’s right and duty to collect the “required fees and court costs.” They reason that problems caused by the debtors could affect law-abiding taxpayers.

To make things even more complicated, some jurisdictions rely on the services of private contractors tasked with going after debtors – and these for-profit collection agencies impose their own surcharges on top of the court fees. The practice has often been compared to that of extortion practices.

Critics say that the punishment can be highly counterproductive because it is generally more difficult to hold onto or find a job after serving time in jail.

Studies also show that the sum often collected versus the cost of incarcerating debtors to not offer an advantage.

Many have gone on to wonder why the practice is being allowed to flourish and why individuals down on their luck with little recourse are being exposed to such harsh illegal mandates. A manifestation which one could argue reflects the pervasive vilification of the poor in society and the constant celebration of the well to do.