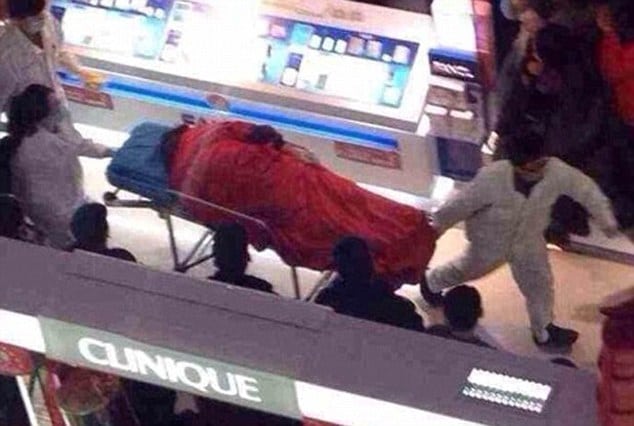 38 year Tao Hsiao, is said to have committed suicide after his girlfriend refused to stop shopping at a local mall, the Golden Eagle International Shopping Center in Xuzhou, China.

The man said to be so fed up with his girlfriend’s incessant Christmas shopping went on to responded to her request for one more look around a mall shoe store by leaping seven floors to his death.

Having been inside the mall for five hours, Tao is thought to have reached his limit, and reportedly insisted that they leave immediately.

Went on to tell an eyewitness: “He told her she already had enough shoes, more shoes that she could wear in a lifetime and it was pointless buying any more,”

“She started shouting at him accusing him of being a skinflint and of spoiling Christmas, it was a really heated argument.”

Kids do you sense something nasty in the works or is this how you spend shopping with your significant other too?

From there surveillance footage goes on to shows the aggrieved man hurling the shopping bags and jumping over the railing onto the cosmetics section below.

A spokesman for the shopping center has since told no one below was injured in December 7 incident, and that the man died instantly upon impact.

Told the spokesperson: ‘His body was removed fairly quickly.

‘He actually landed on one of the stalls below and then fell to the floor so although the store was damaged it meant he didn’t hit anybody.

‘This is a tragic incident, but this time of year can be very stressful for many people.’

What do you think kids? Christmas shopping blues or just a snide way to pass off one’s sense of ‘existential shall I be or not be conundrum’ on to a significant other who can now forever blame themselves for your woes?