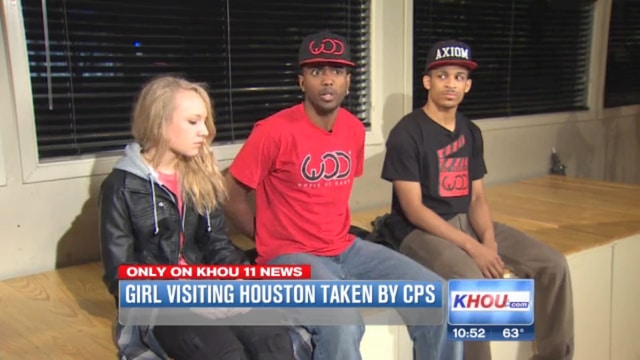 Discontent has come to rise to the fore after a 13 year old girl, Landry Thompson was hauled away from her two African American guardians over the weekend in Houston, Texas.

The teen visiting from Tulsa, Oklahoma was in the company of dance instructor, Emmanuel Hurd, 29 and his dance partner, 22 year old Josiah Kelly when cops hauled the 13 year old away.

Went on to tell the girl’s mother, Destiny Thompson, what cops told her :  ‘Are you aware your daughter is with two black men?’

At the time, Destiny replied that she was indeed aware of the fact, going on to tell she had sanctioned both Hurd and Kelly to be the child’s guardian during her visit.

It wasn’t until after a few phone calls were made that the young blonde was let go.

Since the incident, the mother has gone on to accuse authorities of racial profiling.

Reiterated Landry: ‘It really scared me. They were convinced I was a runaway and they put me in the back of a cop car and I was terrified.’

At the time, dead tired from a long day at the dance studio, the trio dozed off in Hurd’s car, only to wake up and find themselves surrounded by police officers and consequently hauled in. Landry Thompson found herself placed in the guardianship of Child Protective Services whilst her dance instructor guardians went on to be questioned.

Told Emmanuel Hurd: ‘They just pulled us out of the car and put our hands behind our backs like we were criminals.’

‘The officer asked me ‘who’s the girl?’ and I said ‘she’s my student.’

Landry Thompson’s parents have since gone on to tell they understand why their daughter and her guardians were questioned, because they made an unlikey trio to be out so late at night.

However, aware of this fact the parents took significant precautions and packed a range of documents to prove all was above board.

The guardians had a letter signed by Thompson’s parents, her insurance card, her original birth certificate as well as a sheet with numerous contact numbers on it.

The Thompson’s then scanned their drivers’ licenses and sent them to the police during the incident, but were still not immediately believed.

Hurd tried pleading with the police, but it was no use.

‘The officer asked me “who’s the girl?” and I said ”she’s my student…I told him I had a notarized letter from her parents stating that we have full guardianship over her while we’re here.’”

He says police ignored the explanation.

‘They still put handcuffs on me,’ Landry said.

Thompson was let go hours later, at 11.30am but only after her mother repeatedly called Child Protective Services.

Hurd and Kelly had followed Thompson after being released from custody to the CPS center but were told to leave the reception area and were forced to wait for six hours in their car until she was released.

Since the weekend’s event, Destiny Thompson has told she would like an apology.

In a statement, the Houston Police Department has since gone on to defend the actions of their officers, claiming they had exercised appropriate ‘caution’.

Told the statement: ‘Given the age discrepancies…and the child had no relatives in the area, officers in an abundance of caution, did their utmost to ensure her safety and sent her to CPS.’

Find some actual evidence that a crime was being committed before intervening? That’s what I would have the police do. None of the “suspicious” activities you named are illegal, therefore the police overstepped their bounds. The cops don’t have the right to handcuff you for looking suspicious. That’s not how free countries are supposed to work.

So we’re gonna pretend that being with two unrelated white men would have resulted in the same response? Other than the colors of those involved, what were they doing that was suspicious?

I am actually happy that a police officer would notice a young girl asleep in a convenient store parking lot and question the legitimacy of her being there – but I am a mother of a young girl. However, police surrounding the car and then removing her to protective services after they saw the legal documentation and spoke with the dance instructors is absurd. In all of this, did they ever call the girl’s parents to inquire if these were, in fact, the men she was intrusted to? Because it seems like that would have been the first step. The outrage on this issue is really from all sides – that black men were mistrusted simply because they are black and that a young girl was removed from her legal guardians without cause or reason for alarm. Unbelievable.

Let’s face it, if there wasn’t a race differential, the cops would have woken them up and told them to move along after making sure everyone was okay.