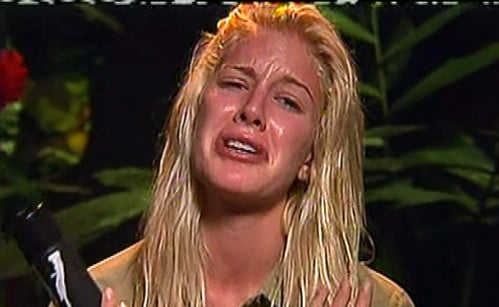 There’s something disquieting about watching a human life go up in smoke, figuratively and metaphorically. Which leads us into the next ‘I think I finally learned my lesson on how to be a decent human being diatribe’ starring Hedi Montag and her man about town, Spencer Pratt.

In going on to explain how they collectively blew through $10 million (yes kids, one can’t help they’re invincible when they’re no longer eating baked beans for dinner) Spencer Pratt offers the following:

“We thought we were Jay Z and Beyonce.”

And that kids is the first conundrum, that as a tabloid wet dream thinking that your ass is valuable and forever virtuous where godzilla money will forever abundantly trickle into your bank account. Never mind the fact that as a reality starlet you have nothing much going on for you except for what the tabloids write about you. Then again there’s also the added inconvenience someone like Jay Z and Beyonce have actual real talent where as you as the reality starlet are as easily replaceable as the next batch breathlessly waiting for their chance on the lottery….

Of their reflection of now being poor since their show, the Hills ended in 2010 and the duo being forced into no man’s land and now ironically being forced to grovel back to the tabloids for a second chance (After Shock: Heidi & Spencer) Heidi Montag goes on to offer the following:

“….took a toll on my soul. I’m thankful not to have fake fights anymore!”

And with the large fake breasts finally (for now) behind her, the tabloid shoots on standstill, Spencer Pratt reminisces the following:

“I miss always going to a restaurant and ordering up as much as I want and [MTV is] paying for it,”

“The free meals were a lot of fun because I like to eat a lot.”

Which of course is another way of saying when you believe the hyperbole of your own fake existence don’t be surprised when the fake dollars stop spouting from the fake oil well….

As Heidi tells: “We are definitely more money conscious now. We are not really rich, but we’re certainly not poor.”

Until the next reality funk that is….