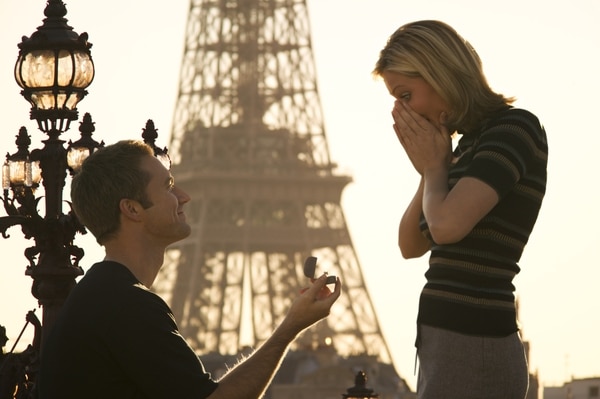 Here’s a report that has me wondering. It details the expectations of women who are involved with significant others and what they expect when it comes to receiving wedding proposals.

According to the UK’s Beaverbrooks Jewellers who commissioned the study, the average woman expects partners to propose for their hand in marriage 3 years and four months into their relationship. And to boot they expect you men to come up with a wedding ring that costs circa 1000 pounds or $1600 USD (although some women will tell you two months of a male’s salary is the more formidable guide but three weeks guide is catching on to).

The UK based study purportedly went on to sample 2000 unmarried women who many told the ideal time to be proposed to involved a romantic situation, usually during an intimate holiday get away (oh really?) and not after more than one drink has been had.

Interestingly the report went on to tell a quarter of women would say no if the proposal was not ‘romantic’ enough and or if it was done at the wrong place or on the wrong day (define wrong day?)

Yet what most women want is for the proposal to be a complete surprise (something this chap finds rather hard to believe) and something that their partner has put great thought to. Never mind the fact that most women augment the idea of marriage into their significant other’s mind well before he finds the volition to ask for her hand.

And while the majority of girls are happy for a simple ‘will you marry me’ one in 10 would love it if their partner serenaded them with a song.

A further seven per cent would like their partner to recite a poem and one in 20 want a flash mob organised on their behalf. Something that this author finds too incredulous to believe or simply he has not met the type of woman who would relish in a mob sharing in her and his private moment.

The report also tells that 26 per cent of women if they hadn’t received a proposal in due time (once again define due time) they would think nothing of doing it themselves. Something of course this author finds very unbelievable.

Goes on to tell a spokesperson for the jeweler: ‘Women dream of their perfect proposal for years leading up to the main event.

‘In fact, most girls know exactly what they want from a proposal, as they do the actual engagement ring and wedding day, long before they meet the man of their dreams.

‘So if the proposal isn’t well thought through and planned with the girl in mind, it won’t be as special as their partner would like it to be. A proposal story is often retold hundreds of times after the event and the more romantic it is the more it’s remembered.

‘This research shows that picking the perfect engagement ring is the icing on the cake of the perfect proposal.

‘Traditionally a man would usually spend the equivalent of 1-2 month’s pay on an engagement ring; however we do find that it’s the thought that counts and women love having a diamond that they’re proud to show off to their family and friends.

‘With Christmas just around the corner we expect to see an influx of proposals, it’s such a romantic time of the year and if last year is anything to go by there should be plenty of happy women over the festive period.’

What do you think lads, will you be proposing to your significant anytime soon or has she already done the proposing for you…? Then again why does anyone really need a pricey ring or a time date or for that matter even a marriage certificate if they really want to be together anyway? Of course it would be nice if women bought men an engagement ring too or is that just me pointing out the reverse sexism when it comes to dating….?