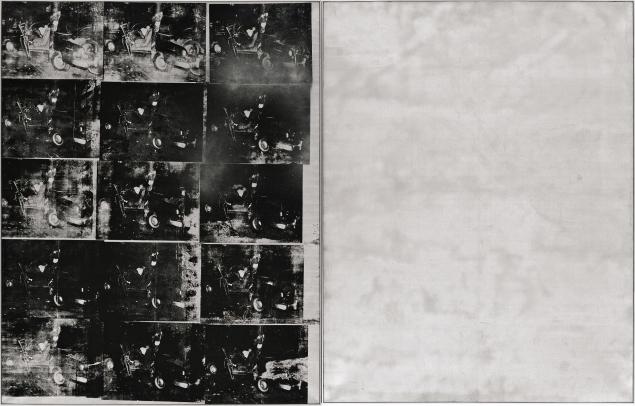 If as an ordinary punter you are trying to guess how Andy Warhol’s Silver car crash (Double Disaster) painting managed to sell for a record whopping $105 million you are not in the minority. It seems talk of the all time record sale, (by at least $30 million since the last Warhol public sale), has led to the whole art community chattering, what’s next and how did Andy Warhol because so brilliant ever since his death anyway?

The painting itself, 8- by 13-feet, produced in 1963 goes on to show the immediate aftermath of a car accident with that of a sprawled body across the automobile’s mangled interior. The painting literally has only been seen once in public in the past 26 years. So obviously there was a lot of pent up demand for the ever giddy public iconic piece. Never mind the iconic status of the artist and that the work itself weirdly parallels a kind of metaphoric car crash of fame, celebrity and of course 2013 American society some 50 years later.

The actual identity of the buyer has yet to be revealed (why is it when it comes to real expensive shit that the buyer’s identity is always kept under wraps? which reminds me don’t you hate it when wanna be’s nonchalantly tell how much thousands of dollars they purportedly spent on say bed sheets…?).

That said yesterday’s Sotheby’s sale beats a previous Warhol auction in 2007 when Green Car Crash sold for $71.7. Notice how the theme of burning, crashing and dying all in fiery bright magenta colors keeps us forever dizzy?

Yet perhaps there was a hint of the degree of pent up demand on the market (yes there are only so many masterpieces a dead master can give us all…. a shame right?) when an iconic image by the artist called Coca-Cola (3) sold for $57.2 million Tuesday at Christie’s auction house.

The high bidding came a day after the most expensive work of art ever sold at auction went for $142.4 million to conclude six minutes of bidding at Christie’s.

Michael Frahm, a contemporary art adviser and partner at the London-based Frahm Ltd told New York Daily News: ‘The demand for seminal works by historical important artists is truly unquestionable, and we will keep witnessing new records being broken.

‘This is the ultimate trophy hunting.’

Christie’s said Tuesday’s sale brought in more than $691.5 million, the highest total for any single auction in history.

Why you wonder? Because it seems the market is yearning for what is ever reliable, resaleable, quantifiable and a barometer of what is considered to be a barometer of the chic, noble and very desirable. Never mind that it might actually bring a shed of joy to their new owner’s heart too. Yes kids art for commodities sake is finally and vividly here to stay because no one really likes the art you’re making right now in your living room. Not until you are probably dead and a verified cultural icon anyway… puff.