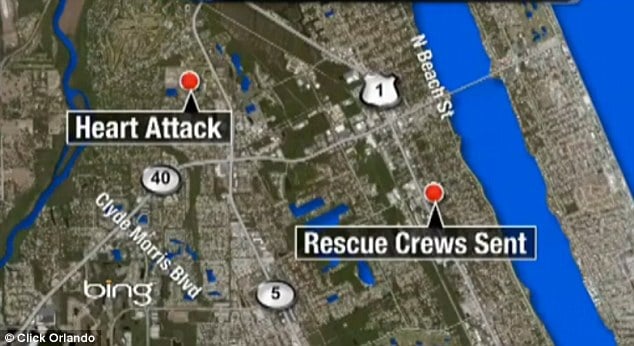 Shauna Justice, 911 dispatcher who was attending to a private cell phone call that led to local Florida man, Bob Hill, dying finds herself in serious trouble.

At the time, the 911 dispatch operator was training a new staff member in Volusia County, Florida, when a call came through on September 4 that a 58 year old man, Bob Hill had suffered a heart attack whilst playing racketball with friends.

In video footage of the incident, obtained by Click Orlando, Shauna Justice is seen using her cell phone while her subordinate entered the wrong location.

Interestingly Justice is seen in the video trying to hide the phone out of view of the surveillance camera, perhaps aware of punitive action taken by her superiors if found.

From there the trainee accidentally went on to send the ambulance to a different recreational center following a miscommunication with the person reporting the emergency.

Fifteen minutes passed before paramedics arrived at the scene. During this time Bob Hill went on to die.

An internal review went on to tell Shauna Justice failed to properly supervise.

It is believed that, had Justice not been looking at her phone, the proper address would have been identified.

Volusia County Sheriff Ben Johnson has told Justice was ‘remorseful’ about the incident.

‘She admitted her mistake,’ he said.

‘She was very remorseful about what happened, very caring about it.

‘She admitted to what her mistake was.’

To date it’s unclear whether the mistake contributed to Hill’s death.

Johnson, however, still said it was a ‘serious mistake‘ that ‘could have been avoided.’

Justice he went on to tell at the time was facing a five day suspension. At the time, Shauna Justice was given a written reprimand but was not taken off the job.

Yet it’s this afternoon where things really got hairy.

At precisely 1.30 pm today Justice pulled a gun threatening WESH reporter Claire Metz who was trying to interview her.

Told Metz: “The gun was no more than a foot or two from my head, and Ms. Justice held it on me until I backed away to our truck.”

At present it is understood Justice is now incarcerated but it is unclear as to what charges she will necessarily now face.

Supervisors have since told that Shauna Justice was not only using her phone, but later she was chatting up others in the center, violating any number of policies and not paying attention to the crisis.